A mama dog stood next to the opening of a storm drain and howled until she garnered the attention of someone who could help.  A rescue team managed to save all the puppies, who were very far down the tunnel.

A massive downpour in Soriano, Uruguay nearly claimed the lives of the mother and her puppies, who were small enough to be washed away by the quickly-moving floodwaters.

She loyally held vigil, howling pitifully with no way to save her babies.  Thankfully a group of people were willing to come to the rescue. 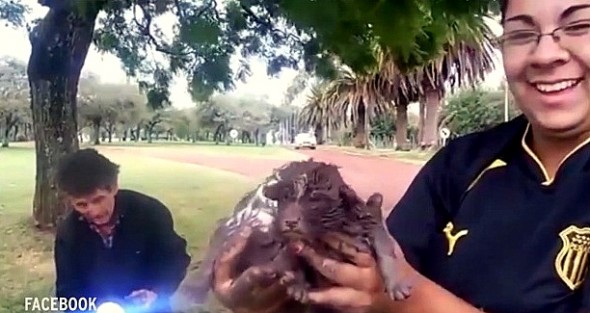 A woman, armed with a bag, army-crawled through the narrow tunnel, which appears to be at least 15 feet long.  Rope was tied around her feet so team members could drag her out once the puppies were secured.

They were covered in muck, but the one-month-olds appeared to be in good health.

“Today the three puppies are happily in a home,” a translation of the video’s text says.  “All were adopted.”

“Simply love, and because the heart knows no reason.”