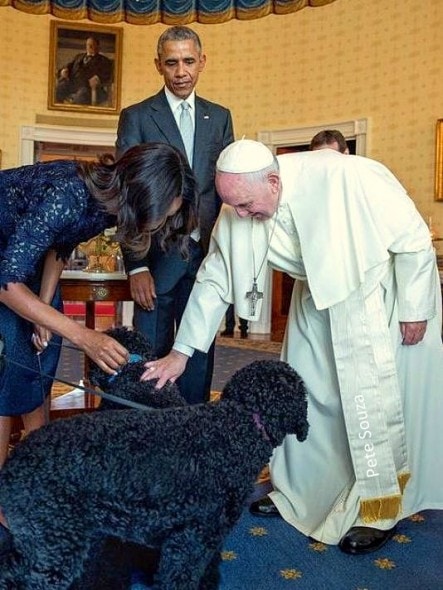 This isn’t a political rally or a religious debate, and we’re not here to choose sides – we’re here for the dogs.  However, occasionally political and religious figures do crop up in the dog news world.  History was made on Wednesday when Pope Francis visited first dogs Sunny and Bo when he visited the White House.

While visiting with the Obamas, the Pope made sure he greeted their Portuguese water dogs – an uncharacteristic papal move.  However, we already know that this man is far more modern than his predecessors, particularly when it comes to dogs.

He once personally requested to meet a journalist’s dog and bless her.  He celebrated his 77th birthday with three homeless men and one of the men’s dogs.  And last year he comforted a little boy who had lost his dog by saying:

“One day we will see our animals again in eternity of Christ. Paradise is open to all God’s creatures.”

Not only is the progressive man “the people’s pope,” it seems he certainly is “the dogs’ pope!”