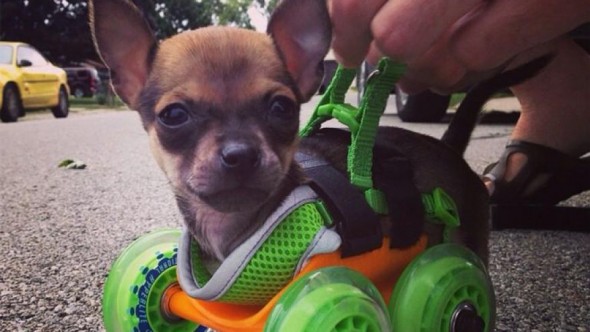 TurboRoo was born without front legs.  After being dropped off at a vet clinic by his breeder knowing she couldn’t care for him, Vet Tech Ashley Looper became quite fond of him.  She ended up fostering him, and thanks to an online fundraising page she set up for him, she was contacted by Mark Deadrick, TurboRoo gets around much easier.

After seeing TurboRoo hop along on the floor “like a little frog,” Ashley knew a cart or doggy wheel chair would really improve his quality of life.  Through her fundraising page she met Mark.  He is mechanical engineer, and had a wonderful idea to help this little dog get around.

“He had messaged me on my personal Facebook (page) and asked me if it would be okay for him to make a cart for Turbo,” said Ashley.  “Within two days he basically, without measurements, without anything, he sent me a message and said ‘I have a cart for you, it will be in the mail, you should get it by Thursday,’ which was two days after we spoke.”

Mark has now made three different versions of the 3D printed cart.  Mark is president of a company called “3dyn.”  He and Ashley speak often about adjustments that needed to be made, as Turbo makes his way to fully grown.

“We’re working with Mark to update his cart as he grows,” Ashley said.  “He should get anywhere between five to eight pounds at the very most.”

Turbo enjoys a massive social media following.  He has accounts on Instagram, Facebook and Twitter.  Each of these accounts have over 20,000 followers, all watching Turbo grow up to adulthood, and each evolution of his specialized cart, given to him by one forward thinking man and his 3D printer.

“I think it’s amazing that people are just so supportive of him,” Ashley said.