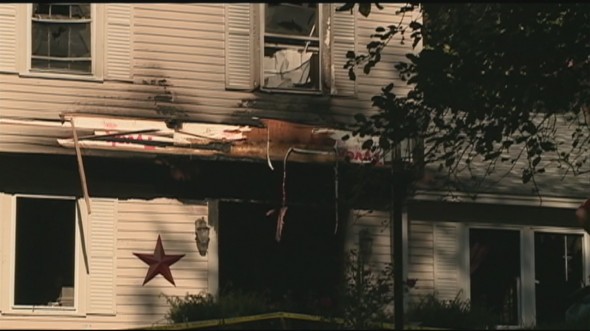 A family from New Ipswich, New Hampshire is crediting their puppy with saving their lives from a fire that broke out in their home.  Thanks to the puppy’s relentless barking the humans in the family made it to safety.

A three alarm blaze broke out on Ashby Road around 2 am Monday morning.  The size of the fire required first responders from many of the surrounding towns.

Upon arrival, firefighters were faced with a porch fire burning out of control, and spreading to other parts of the house very quickly.

According to New Ipswich Fire Chief David Leel, “It’s an old house and they are currently doing some renovations the house, so it was difficult.  There were a couple of areas that very difficult to get to, such as the attic.”

Two sons aged 11 and 19, and their mother and father were in the home when the fire broke out.  There also was a 5-month-old golden retriever and two cats in the house at the time as well.

Even with her heroic rescue attempt of the furry family members, they didn’t make it out, and the mother of the family suffered burns to almost all of her back.

“I ran out of my room and I saw the smoke and stuff.  So, I yelled for my little brother to get out of his room and stuff, so I made sure he got out.  And then, I went to the other side of the house to make sure everybody was out of there,” said the oldest son, Dan.  “And I tried to get my dog out of the porch, and it was too late.”

“She was just barking and stuff.  She’s just so innocent, I don’t know,” he added.  “But yeah, the dog saved our lives.  We would have been dead.”

Investigators are still looking for the cause of the blaze that took the lives of three furry family members that morning.  The Masse family is thankful to the barking of their puppy for saving their lives, but are devastated by their loss.