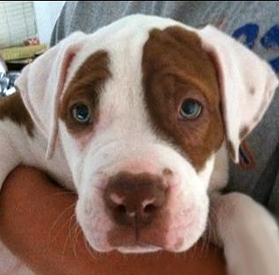 An 82-year old Arizona woman said she thought it was raining dogs when an owl dropped a 9-week-old bulldog mix puppy in her back yard. The young dog was scooped up during a midnight potty break, and foster parent Aimee French says this is the second time the lucky pup has avoided death.

French recently pulled a mother dog and her puppies from a kill shelter just moments prior to euthanization. “There are so many animals there that need my help,” French said.

The animal lover says she was horrified when an owl swooped down from the sky and carried the puppy away while she was letting the dogs out for a late night potty break. French watched helplessly as she was carried away over her back yard fence.

“I hear Sally do this death curling, screaming cry,” French said. The pup’s mother even tried to save her. “The mom is jumping in the air, growling, barking and they ended up running over here,” she said.

French assumed that the puppy had been killed after searching for her for days, and was amazed to learn that the young dog was alive and well after being dropped in a nearby back yard. “She was an 82-year-old grandma and she thought that puppies were falling from the sky – that is what she told me because the puppy miraculously appeared in her backyard,” French said.

The resilient dog was unharmed aside from a small scratch on her ear, and will soon be available for adoption. If you are interested in providing her with a home, please visit www.ohanaanimalrescue.org.  Interested potential adopters can meet her at the Petsmart at Tempe Marketplace next Friday and Saturday from 4:30 to 8:30.

7 thoughts on “Puppy Dropped from Sky by Owl”