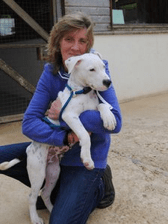 A puppy estimated to be between 12 and 16 weeks old has been rescued after being found dumped in a bin in Bicester in the UK.

The dog, who has been named Binny by his rescuers, was found with bleeding feet around the claws after having being forced through a small opening into the recycling bin and then struggling to escape.

Local councillor Nigel Morris called the person who had dumped the Staffordshire Bull Terrier cross “callous” and said they could be prosecuted by the RSPCA if tracked down.

He said: I’m a dog owner myself and I can’t imagine how I would feel if my pet had been put through this kind of ordeal.”

The puppy is now recovering after being taken in by Ardley Rescue Kennels near Bicester. The kennels was started in 1997 and runs a 24 hour a day service for dogs that need help in the Oxforshire area.

Kennel trustee Annabelle Pottle said: “It must have been quite an ordeal for him. We think he’s deaf, which probably means he has some English bull terrier in him.”