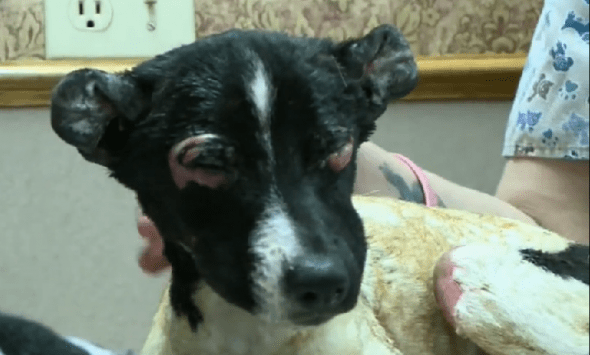 Police in Buffalo, New York are investigating the discovery of a Jack Russell Terrier found on fire Monday night. The puppy, which veterinarians believe is 16-weeks-old, was taken to the animal hospital where he has shown signs of improvement since Monday. The hospital, which has named the dog Phoenix, is not sure if he will make a full recovery.

Mary Baldwin though what she saw outside her kitchen window Monday night was burning paper. Then she spotted paws and realized it was an animal. Baldwin quickly called 911. While she was calling for help she noticed a man that appeared to be trying to put the fire out. Baldwin couldn’t believe what she was seeing happening to this poor dog, “He probably wondered: What did I do to deserve this? What did I do,” said Baldwin.

Police, firefighters and animal control all responded to the scene and wrapped the Jack Russell Terrier puppy in a blanket and transported him to the Buffalo Small Animal Hospital. The veterinarians treating Phoenix smelled what they believe may be lighter fluid on the puppy. Phoenix has burns all over, with third degree burns over 30 percent of his body.

When he first arrived on Monday the animal hospital pumped Phoenix with fluids and pain killers. In addition to his singed fur, his lips were very swollen and he struggled to keep his puffy eyes open. “He’s obviously very critical, for the next 5-7 days. He does look better today and he’s eating food, so that’s a good sign,” said Dr. Rebecca Wagner. His eyes are also starting to look better. Phoenix is expected to survive, but it is unclear whether he will make a full recovery.

Baldwin is haunted by what she saw on Monday, “I will never, ever, as long as I live forget that.” The story of what happened to this puppy has brought in a flood of donations from the community. The animal hospital has received more than enough donations to cover Phoenix’s medical expenses, and will put any excess donations to help with future animals in need.

Authorities have not found an owner or any leads to who may have committed this horrible crime. Anyone with information is asked to call the police confidential tip line at (716)-847-2255.