Duncan, a three-month-old boxer puppy, was born with severely deformed hind legs that were damaging his spine. Earlier this week the young puppy had his hind legs amputated, but Duncan didn’t let that slow him down. Soon after surgery he shocked and inspired many people as he walked around on just his front legs.

Duncan came to Panda Paws Rescue a week ago. The rescue specializes in helping animals with special needs. After an examination a veterinarian determined that not only were Duncan’s hind legs deformed but they would impact his spine and cause pain if not removed.

“Those legs caused damage to his spine, and would continue to until he is in excruciating pain, unless we made the decision to remove them,” said Panda Paws’ founder Amanda Giese. “He’s a happy, playful, pain-free, joyful and normal puppy in every other way.” 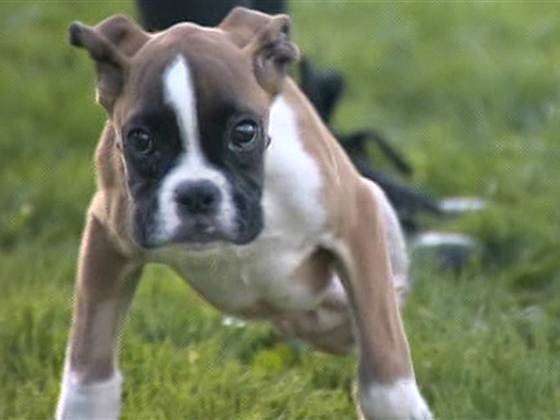 On Tuesday, Duncan went in for surgery to have both hind legs removed completely. The surgery went extremely well and Duncan was up and walking soon after. Although he had to relearn his balance, with the weight of his hind legs gone, the puppy seemed unfazed.

A day after the surgery Panda Paws posted a video on their Facebook showing just how well Duncan is getting around. The video soon received thousands of likes and shares as viewers were amazed and inspired by the young puppy’s perseverance.

Duncan still needs time to recover though, and will undergo physical therapy and hydrotherapy to help repair damage to his spine that had occurred from his legs. Once he is healed he will be fitted with a wheelchair.

Duncan’s spirit has already found him a home with Geise.

“It was love at first sight for our whole family and we couldn’t imagine the next 10-plus years without him bringing joy to our lives,” said Geise. “We are very blessed and feel like we won the dog lottery with this amazing baby.”