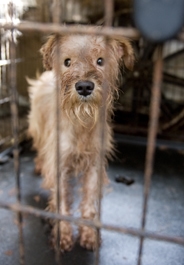 A former international dog show judge and his wife have been banned for owning pets for 20 years after being found guilty of large-scale animal cruelty at their commercial breeding facility.

David Neil Balfour and his wife Daryl Kirsty Reid Balfour were sentenced by Judge Grant Fraser on Friday for animal cruelty documented at their ‘puppy farm’ in Dannevirke, New Zealand.

The couple will pay $25,000 in fines to the SPCA, and were specifically banned from owning any pets for 20 years – effectively a life sentence given their ages.

Advocates say this is a major win in the fight against mass breeding abuses, and SPCA National CEO Robyn Kippenberger said that the ruling will send a strong message to other large-scale breeders in New Zealand. “This long term disqualification of the Balfours will prevent them from breeding and inflicting further cruelty on other animals,” Ms Kippenberger said. “We are pleased with the length of the disqualification which, given the age of the defendants, is effectively a lifetime ban.”

During the 2011 hearing, SPCA animal welfare inspectors said they found 161 cats and kittens and 87 dogs and pups in atrocious conditions on the Balfours’ Dannevirke property. More than half of the animals could not be saved and were euthanized to end their suffering.