How much has that doggie in the window suffered? If it came from a puppy mill, immeasurably.

They live and breed in cages, are brokered as commodities, and mongered to pet stores by the millions. Take Andy, for example. A dachshund from Draper, Utah, Andy was lucky to find a committed owner, but she is plagued by numerous behavioral issues, severe separation anxiety among them. Given her history that comes as no surprise. 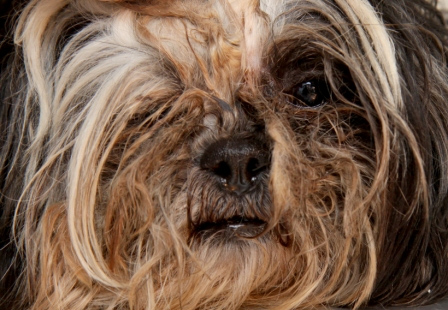 “The vet has pretty much said that she’s been bred non-stop probably since she was about six months,” said Andy’s owner Debby Church. “When we went to get her spayed they even found a mummified puppy inside of her.”

Andy also had four mammary tumors removed by her new owner. She came home with those – one of them the size of a lemon. She also had a broken tail.

Best Friends Animal Society veterinarian Doctor Frank McMillan recently conducted a study that compared a wide array of psychological and behavioral characteristics of former breeding dogs recovered from puppy mills with those of standard pet dogs. A total of 1,169 former puppy mill dogs were included in the study.

The results showed a broad range of abnormal findings in the former breeding dogs, including: significantly elevated levels of fears and phobias, pronounced compulsive and repetitive behaviors such as spinning in tight circles and pacing, house soiling, and a heightened sensitivity to being touched and picked up.

McMillan said, “The most prominent difference was in the level of fear; compared to normal pet dogs, the chance of scoring in the highest ranges for fear was six to eight times higher in the recovered puppy mill dogs. Interestingly, the heightened fear was accompanied by a decreased chance of the dogs showing aggression.”

In working with and following these dogs’ progress, McMillan said, “The majority of the dogs improve over time, and it’s important to note that many of them lead very happy lives, but many also continue to struggle emotionally for the rest of their lives—just trying to gain comfort in a world we all take for granted. To them the world and all the people in it just can’t be trusted—it is something to always fear. The damage done to these dogs is heartbreaking.”