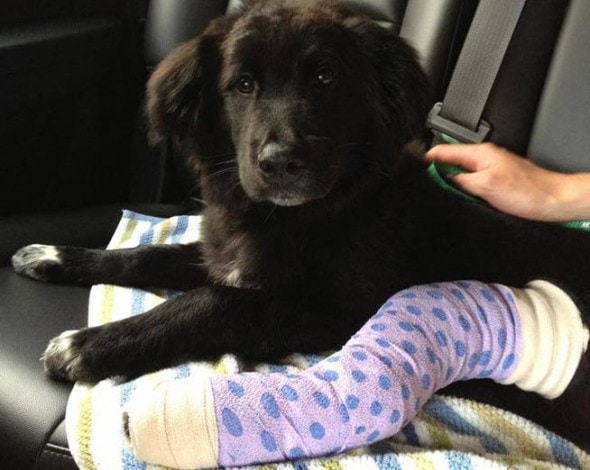 A Virginia puppy is recovering after he was tossed from a second story balcony causing his leg to break in four different places. Now the Prince William Humane Society is trying to raise the funds to cover the cost of his surgery.

Last week, a person driving through downtown Fredericksburg, Virginia saw someone throw an object  off of a two-story apartment landing.

“They saw a figure throw something black into a parking lot and then they heard a loud squealing, yelping, and they were kind of frightened and said, ‘What was that noise?’” said Capt. Dawn Harman with the Prince William County Police Department’s Animal Control.

The witness stopped to investigate and found that it had been a border collie puppy which had been thrown. The man rushed the puppy to the vet.

The puppy, which has since been named Dexter, had a severely broken hind leg. Deter is now in the care the Prince William County Animal Shelter.

“[Doctors] performed surgery on him on Saturday and they put four pins in his leg,” said Capt. Harman. “He now has a cast on, which he has to keep on for at least three weeks.”

Prince William County Animal Shelter is asking for donations to help cover Dexter’s care. The surgery alone cost $2,600. If you would like to donate you can do so here.

Dexter is doing well despite his ordeal. His recovery will take several weeks, but he will be ready for adoption soon.