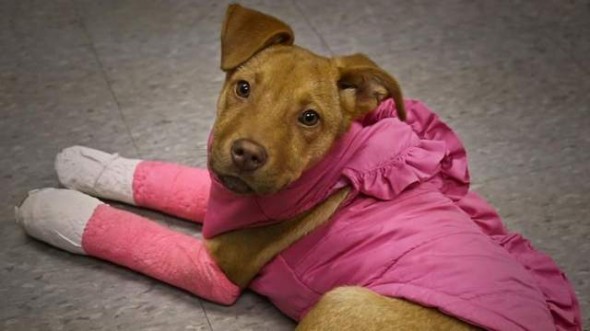 In late October a German Shepherd mix puppy took a fall from a second-story porch in Detroit. The fall caused both of the puppy’s front legs to break. Now outfitted in two pink casts, the puppy rescuers have named flutter is on the mend.

“When she was offered treats, she couldn’t walk over to it,” said rescuer Stacey Bean. “She had to kind of scoot herself over to it.”

The puppy’s owner surrendered her to MHS and rescuers took her to MHS’s Detroit animal care facility where x-rays revealed the reason she wouldn’t put weight on her two front legs was because they were fractured.

Flutter was fitted with casts on both her legs and is now being fostered by Bean while she recovers. With her casts Flutter is now able to get around, but it will take six weeks or even longer before she is fully recovered.

“There are going to be some challenges,” said Bean. “Baby gates that need to be put up, blocking off stairways, putting down rugs to help protect her from sliding out of control, but she’ll do fine and she’ll be up for adoption soon.”

1 thought on “Puppy Recovering after Falling From Second Story Porch”