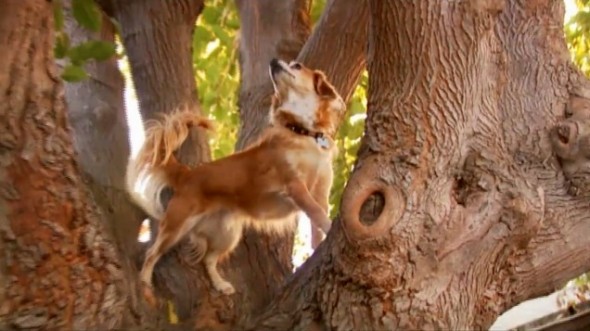 We’re all familiar with the concept of firemen coming to the rescue of the neighborhood cat who’s gotten stuck in a tree, but have you ever seen a dog climb a tree?

Geri’s dog Buddy has been climbing trees since he was a puppy.

“I was nervous about it at first, but now he seems very sure-footed, so I don’t worry about him.”

Cats have curved claws that allow them to easily climb up, but on the way down, they become scared and confused once they no longer have that gripping ability.

Buddy, on the other paw, courageously leaps from branch to branch, and easily scampers back down the gentle slope of his favorite mulberry tree.

“I tried to get some good still pictures of it, but it’s hard, because I can’t move fast enough,” Geri laughs.