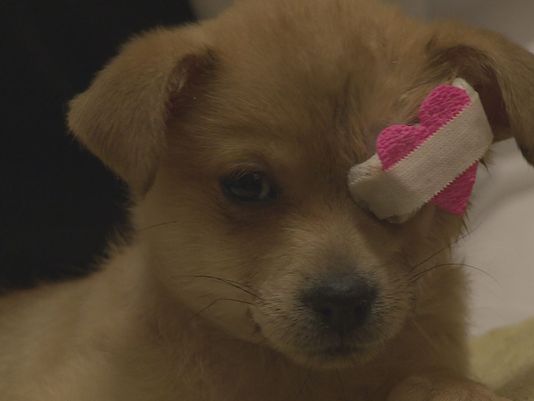 Last week a Chihuahua-mix puppy was rescued from a trash can outside an apartment complex in Michigan. The 8-wek-old puppy is now recovering and will soon be ready for adoption.

McKenzie Coleman was sitting on her couch the night of February 5th when she heard a faint crying coming from outside.

“I didn’t know what it was,” said Coleman. “I looked out there, didn’t see anything, and then saw a little puppy in the trash barrel.”

Coleman quickly brought the puppy safely out of the cold and began caring for her. Unable to keep the puppy herself she eventually contacted the Kent County Animal Shelter. The staff at the shelter quickly realized that the puppy, which was given the name Foxy, had something wrong with her left eye. Surgery would be necessary.

“When we got into surgery, after doing the ocular ultrasound, we not only discovered Foxy had an abnormal eye, but she also had a large 3-centimeter cyst behind her eye,” said Dr. Cassandra Bliss.

Both the eye and cyst were removed, but Foxy is recovering well and her veterinarians expect her to be back to normal within a week. Once Foxy is recovered she will be looking for a new home. Anyone interested in adopting her can contact the Kent County Animal Shelter.