In Harris County, Texas a group of families and a few local friends had spent the past two months attempting to rescue a 5-month-old German shepherd mix stray.  The dog had been running loose in the neighborhood, and in an attempt to search for some food, the dog got his head stuck in a plastic bucket.

According to Audra Bohannon, the bucket was from a gravity fed dog food bowl, which can be commonly picked up very cheaply at your local pet store.  Bohannon believes that the puppy got into her barn where she had one of these dog feeders, and while checking it for food got his head stuck.

In speaking to Local 2 News out of Texas, Bohannon said she felt guilty when she had first seen the little dog with the bucket stuck on his head.

“Every night I went to bed thinking about that dog and I really felt bad for him having that on his head,” said Bohannon.

Day and night, rain or shine, Bohannon made it a personal mission to save this dog’s life.  She spent many hours riding her four-wheeler around her property trying to locate the poor pup.  She tried many different things in an effort to wrangle the dog in, even trying fishing nets at one point.  Nothing they seemed to try was working.

After weeks of trying to bring the dog in, they finally were gaining the dog’s trust it would seem.  They were able to get the dog safely rescued, and promptly got him unstuck from that plastic bucket.

“We got him up here, cleaned him up,” said Bohannon. “He was flea infested, but other than that, he was just a little skittish.”

The puppy has been named Bucky, which is of course short for Bucket.  The Bohannon family has decided they would like to make Bucky a permanent member of the family, as long as he is not missing and someone isn’t looking for him.  The family will be taking Bucky to a vet to have him checked for a microchip with his owner’s information on it. 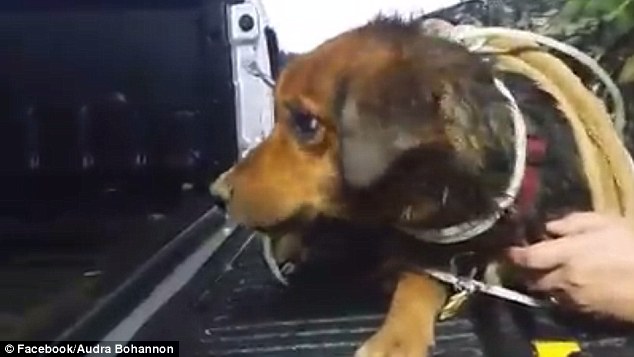