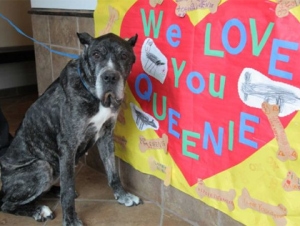 Not long ago, you read about a Cane Corso named Queenie who was found after being locked in a room for 3 weeks with no food or water.  She was hours from death and her prognosis was poor, but Queenie has proven to be resilient and has just been released from an animal hospital in Long Island where she has been treated.

Queenie had been locked up and denied food by a spiteful ex-husband and it wasn’t until his ex-wife came by the house to pick up some things that she discovered the poor dog and contacted a pet rescue group for help.  The group Guardians of Rescue came to Queenie’s aid immediately, certainly saving her life.  She was incredibly emaciated and did not want to even stand up when she was found, having essentially given up on life.

According to her doctor, Mark Caproso, she has made an incredible recovery considering she lost half her body weight during the ordeal.  Queenie is now going home with Tuncay Adem, who is one of her rescuers.  Adem runs Canine Counsel, a rescue and rehabilitation center for dogs and has been working with dogs since he was 14.  There is no situation he will not take on, and he has traveled across the country to save a dog’s life.

Fortunately for Queenie, she is now is good and loving hands and can look forward to happy days ahead.  Her owner, Michael Faulkner has been charged with animal cruelty.