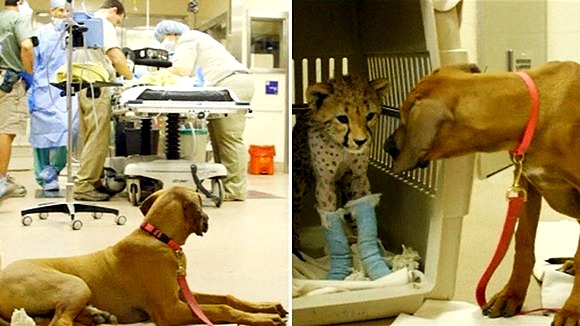 A few months ago we introduced you to Raina, the Rhodesian Ridgeback puppy who had befriended a cheetah cub abandoned by his mother.  The babes are growing up, and are still close as ever.  In fact, Ruuxa recently had surgery on his front legs, and Raina was right there with him the whole time.

Ruuxa was abandoned by his mother likely because he was the only cub born, but he hasn’t been any worse for the wear since he met his best buddy Raina at the San Diego Zoo Safari Park.  Though the pup is only one week older, she has been a very calming, motherly influence for the big cat.  They adore playing and napping together, and understand each other’s body language very well. 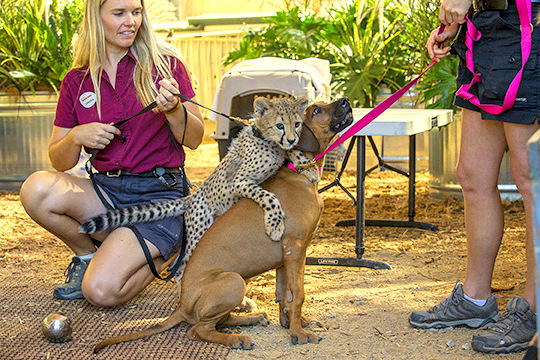 They are so bonded that a very concerned Raina waited in the operating room for her friend to come around after surgery.  It had been discovered that the growth plates in the ulnas of Ruuxa’s front legs had stopped growing before the radii, causing his legs to bow.

“This is a condition occasionally seen in domestic dogs and, if not treated, can cause pain and problems with the animal’s ability to walk later in life,” said Safari Park senior veterinarian Jeff Zuba.  “With the help of Dr. [Sean] Aiken, who is experienced with this procedure, we were able to correct the deformity.” 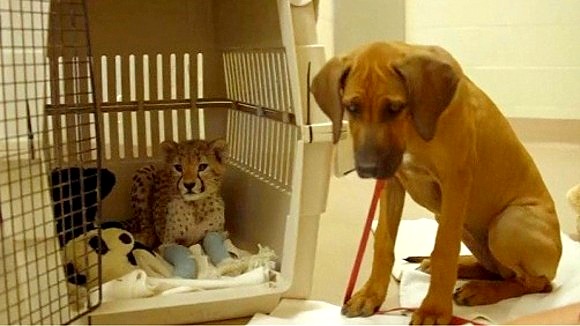 The nurturing puppy went with Ruuxa to the clinic, and waited nearby during the procedure.  Afterwards, she sat by his kennel until he woke from the sedation.

“Raina appeared very concerned about Ruuxa when she saw he was sleeping and she couldn’t wake him,” said Susie Ekard, the park’s animal training manager. “She licked him and nuzzled him, and when he awoke, she lay with him and seemed very content to know her cheetah was okay.” 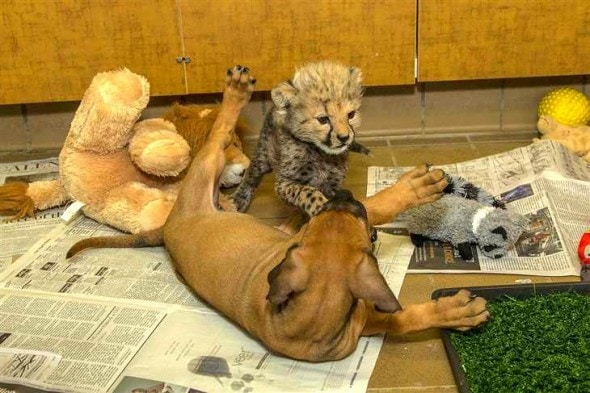 Ruuxa is expected to fully recover, and the two should be back to their usual roughhousing in a few weeks.

“I’m very thankful that we were able to have the technology and the expertise and the facilities and everything to do this,” Ekard said.