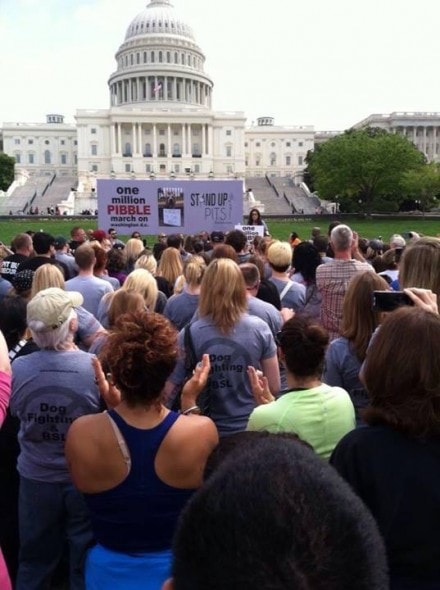 On Saturday, activist gathered in Washington D.C. for a demonstration against “breed-specific legislation”, or laws that ban or restrict ownership of dogs by breed, most commonly, pit bulls.

She’s a comedian, and also helped organize this rally in Washington.  She organized the “Million Pibble March,” pebble meaning pit bull.  She has a rescued pit bull named Angel as a forever friend.  Angel came to Corry through a rescue group, and was very badly abused by its previous owners.

“Today we are sending the message to legislators on the federal, state and local levels that killing and banning the victim is not and never will be OK, or the answer,” said Corry. “People trying to put an end to pit bull terriers live at a low level and need rescuing, too.  Sadly, trying to reason with dumb is like asking a person with no arms to give you a hug.”

The crowd that gathered was estimated in the thousands.  Some people showing support with pro-pit bull shirts and signs.  Brianna Creash, who came down from New Jersey with her mother was sporting a tattoo of the family dog, a two and a half-year-old pit bull named Maggie.  Maggie became part of Creash’s stepfather found the dog eating trash on the streets of Philadelphia.

“She literally jumped in the truck,” said Creash.

Onstage during the rally, many stories were shared.  Jamie Buehrle, the wife of major league baseball player Mark Buehrle, spoke about living separately from her husband.  Toronto, where he lives and works during the regular season, had banned pit bulls all together.

A police officer named Kelly Steinhorn talked about Pretzel, her pit bull that came to her through a rescue that found Pretzel with her throat slashed and had open stab wounds in her chest.

“She was still damn friendly, sweet, and she was trying to lick all of us,” said Steinhorn.  “Proving that pit bulls are born inherently good.”

Roo Yori, owner of Wallace, also a pit bull, was at the rally as well.  Wallace was rescued from certain euthanasia, only to become a champion athlete and the subject of a bestseller.  He said he believes things are getting better for these dogs all the time, despite such a negative image.

Their message is getting out there now.  It shows how breed specific legislation is expensive and difficult to enforce, while doing nothing for the real issue, which is public safety.  Other areas see this as fact and have even gotten rid of the specific bans on specific breeds.  More so than places adoption more bans.

Chris Williams, actor and brother of Vanessa Williams was there and the emcee of the event.

Corry believed and had decided early that dogs were not going to be allowed at the rally.  However, a few attendees did show up with their pooches.  This is to be expected in a crowd full of mega pit bull lovers.  The “contraband” canines were surrounded by kneeling people, petting away in full happiness.  The dogs were loving the attention.

“Sure, he’s a service dog,” said the owner of Charlie, an 80 pound pit bull.  He didn’t mind all of that attention at all.  “Maybe for today.”

As the rally was winding down, Corry got to the microphone once more to say, “I want to say at the nation’s capital, I [email protected]$#ing love you, Angel!”