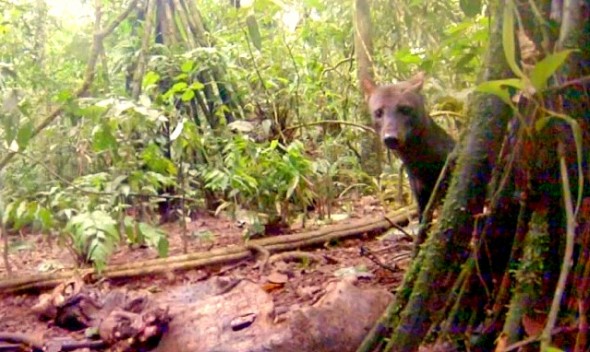 One of the Amazon’s most mysterious and rarely seen creatures – the short-eared dog – was recently caught on video.  The chances of seeing one are slimmer than the odds of seeing a jaguar.

“They are incredibly rare and hard to see,” noted ecologist and veterinarian Renata Leite Pitman.

The Duke University researcher and National Geographic grantee has been studying short-eared dogs for fourteen years, and in all that time, has only managed to get tracking collars on five of them.

“They are very timid, totally different from pets,” she said.

Their dark coats help them blend into the underbrush so they can avoid predators.

At the end of May, conservation biologist Lary Reeves set up a GoPro camera by the carcass of a white-lipped peccary (hog-like animal).  The body had been found on a trail near the Tambopata Research Center in Peru. 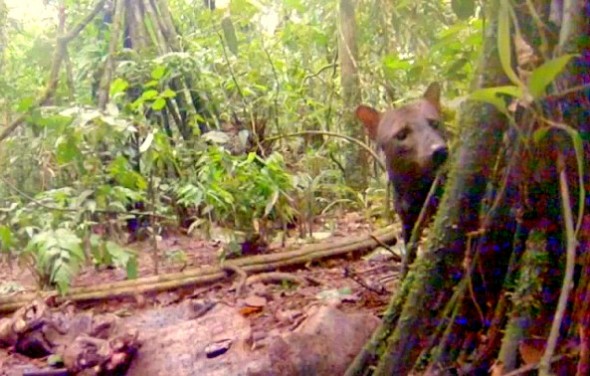 Reeves wanted to record what he had heard was a “king vulture fiesta,” so he took on the assailing insects and the putrid odor to set up the camera.  He had no idea he’d be seeing one of the furtive, fox-like creatures.

“The dog came by about 20 minutes after we left,” Reeves said.  “That was crazy.”

It didn’t stay for long, which isn’t surprising.  “They avoid cameras,” Pitman explained.

From previous experience she knows that the blinking lights and smell of humans wards them off.  Because of their elusiveness, not much is known about them.  Information about population statistics and behaviors is lacking.

But it is suspected that their numbers are declining due to deforestation and prey depletion.  Domestic feral or abandoned dogs wandering into the jungle can introduce a number of diseases, including parvovirus.

But for now, researchers like Pitman and Reeves continue to study and lobby for the indigenous species who desperately need our protection to continue to thrive.

To see the video (which was not able to be embedded) please click here.