Earlier today we told you that 10-year-old diabetic NeVeah Perry’s service dog SymPhany had been stolen from her.  Now we are happy to report that the family has been reunited with her.

“The gate [in the backyard] is broken,” said NeVeah’s mom JoBeana.  “I chained it so [people] can’t access the yard.  I trained her myself and that was a very, very, very hard task.”

SymPhany could not just get out of the yard – she had to have been taken.  The Perrys were devastated.  Type-1 diabetes is difficult enough for a kid to deal with, but having her dog – her friend, her assistant – stolen on top of it is just rotten. 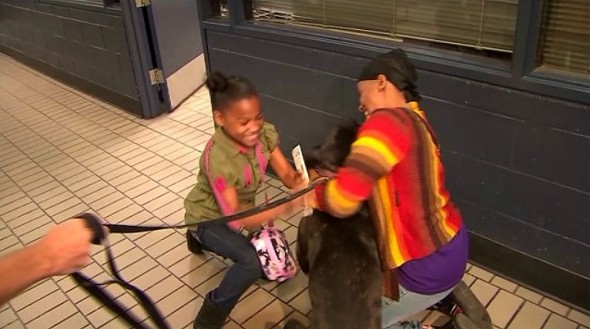 “This dog is very special to both of us, we are lost without her,” JoBeana said.

Good Samaritan Jovan Jackson saw SymPhany and recognized her from the news.  He knew he had to catch her, so he got in his car and followed her.  She was skittish and kept running, but he tailed her until he could grab her and put her in his car until police arrived.

NeVeah and JoBeana were overjoyed when the Grand Crossing District of Chicago called to tell them that SymPhany had been found.