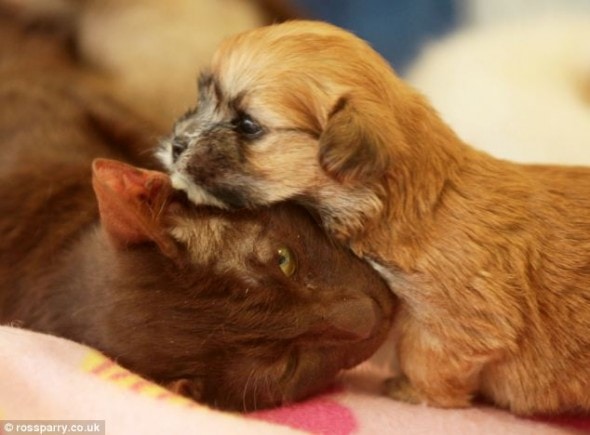 When Hope, a one-week old Shih Tzu puppy, was rejected by her mother she found a new mother in a Siamese cat named Coco.

When Hope’s mother gave birth to two puppies unfortunately one was stillborn and the mother then rejected Hope. Luckily Hope’s owner’s partner, Paula Ball, had a cat that gave birth to kittens on the same day.

“My cat gave birth to three kittens on the same day and although we thought it was a long shot we decided to see if Coco would take the little pup and she did straight away,” said Ball.

Hope fits right in with the three kittens as she is the same size. Coco treats her like one of the litter and feeds and washes her just like the others. Hope and Coco’s vet was surprised at the turn of events.

“It is quite unusual for a cat to take a puppy on as its own, but it helped that they were born on the same day and that Paula acted so quickly to introduce the puppy,” said veterinarian Lizzie Goldstraw.

Ball plans to ween Hope from Coco by the time she is six-weeks old. By that time Hope will be getting to big for Coco to care for.