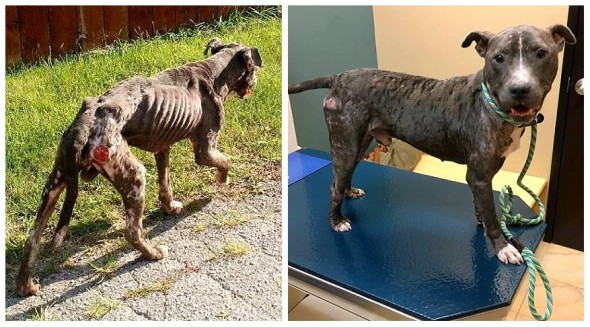 You may remember Augustus, a badly abused and neglected dog we told you about in August.  He was emaciated, anemic, and had open wounds from a gunshot and a pressure sore.  It’s been over two months since his rescue, and though he still is not fully well yet, he is doing so much better, thanks to Trio Animal Foundation and his caring medical team.

This is what TAF originally posted on August 1st:

TAF has taken in one of the worst cases of abuse that we have ever seen.

Augustus was found walking down the street on the south side of Chicago. A concerned citizen called the police dispatcher and asked for help. It was then that the police put out a desperate plea for assistance. It did not take long before TAF was contacted and our friend Frank dropped everything to go and pick up Augustus.

As Frank pulled Augustus out of his car at the ER vet, it took everything not to burst into tears. In his arms was a defeated dog who looked to be holding on for dear life…. the abuse that this dog had endured was unfathomable.

Chunks of fur and skin were falling off as we walked through the front door at the ER. Augustus’ head was sunken in, he had large deep wounds that were dripping blood and his bones pushed so hard against his skin that they looked as though they would break right through his flesh. With such severe muscle atrophy and starvation, Augustus looked like a skeleton. 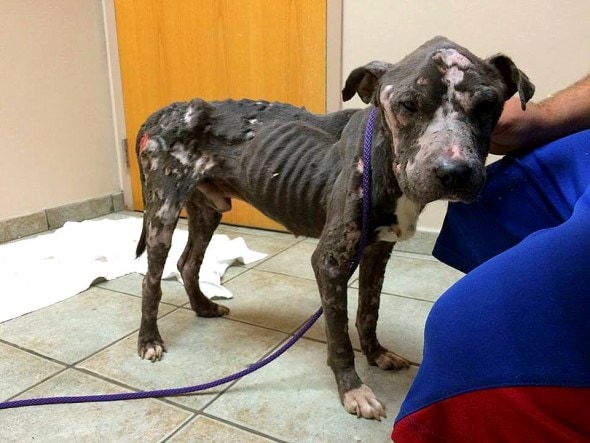 Augustus is now being treated in the intensive care unit at the emergency vet. While many of his test results are not back yet, and some tests will be repeated to check for any signs of improvement (or even decline), we know that our boy is in really bad shape.

Augustus will likely need a blood transfusion because his red blood cell count is dangerously low as he is severely anemic. His white blood cell count is through the roof with so many sources of raging infections, and blood poisoning is a real concern.

In addition to all these things, the starvation is starting to take a toll on his organs as evidenced by his blood chemistry results. Once Augustus is a little more stabilized, X-rays will need to be taken to see if his open wounds are the result of gunshots.

We spent some time with Augustus at the vet today and wanted to provide an update about what is currently going on with him.

His medical team believes the hair loss, scabbing and infections on his skin are the result of chemical burns while the wound on his back paw is an open, infected gunshot wound. The lesion on his backside is a deep, infected pressure sore.

After his bloodwork is repeated several times over the next 24 hours, his medical team will have a better idea if he needs a blood transfusion. 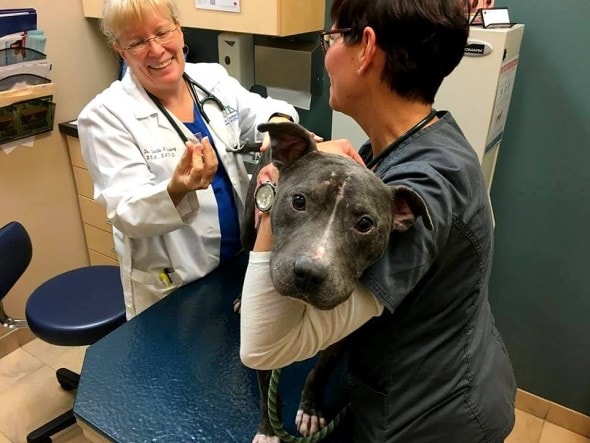 Two months later, Augustus had definitely made a lot of progress, but was battling a very itchy skin condition, which turned out to be something rather alarming:

Augustus was developing lesions and pustules over his back, neck, belly and the top of his head. He was so itchy it was all he could focus on and our poor pup wouldn’t even eat his breakfast yesterday morning because he was so uncomfortable. Fortunately the dermatology specialist had an opening and we took him in first thing in the morning.

When we first reviewed everything Augustus has been through, the specialist remarked that when a dog has experienced so much trauma and neglect, their body takes a long time to recover. In his case, there will be several layers of healing that need to occur for his skin, so it’s not surprising his skin issues have flared up again. He is at a great weight (45lbs) and looks so great overall that now we can focus on the external issues that are persisting.

First, Augustus had samples of skin flakes taken from several locations on his body. These samples were then put on microscope slides so the specialist could look at the samples closely. She was able to determine that there was a tremendous amount of bacteria over his body, specifically on his back which is also where he is the itchiest. She checked for yeast and other fungi as well, but only his feet had trace amounts visible.

Second, Augustus had some skin samples and fluid samples taken and sent off for culture and sensitivity tests. This will help us understand exactly what bacteria is growing and what medications can be used to best fight the infection.

For now, we are using special medicated baths, medicated wipes and topical ointments. We are also giving him an antihistamine to help combat the itching. Augustus is resting comfortably and we will continue to be very diligent about what he is exposed to in his environment.

Unless something else comes up, Augustus has a follow up appointment on October 31st. We will continue to keep you posted on his progress.

Augustus is suffering from MSRP, dubbed the canine equivalent to MRSA, the terrifying necrotizing fasciitis (flesh-eating bacteria).  He receives these medicated wipe-downs twice daily, as well as medicated baths, topical ointment treatment, and antibiotics.  Hopefully this will clear up soon, and all can be thankful that Augustus is being given the best care possible. 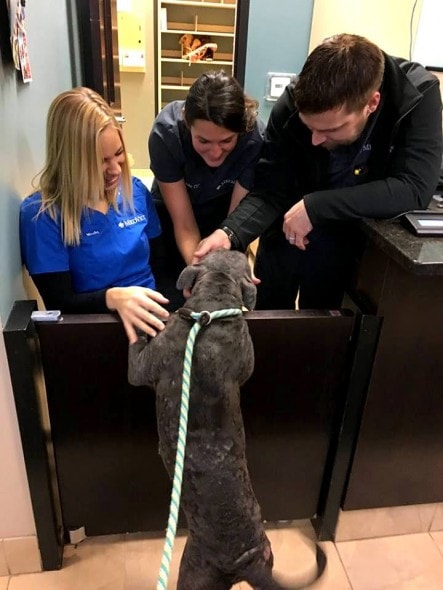