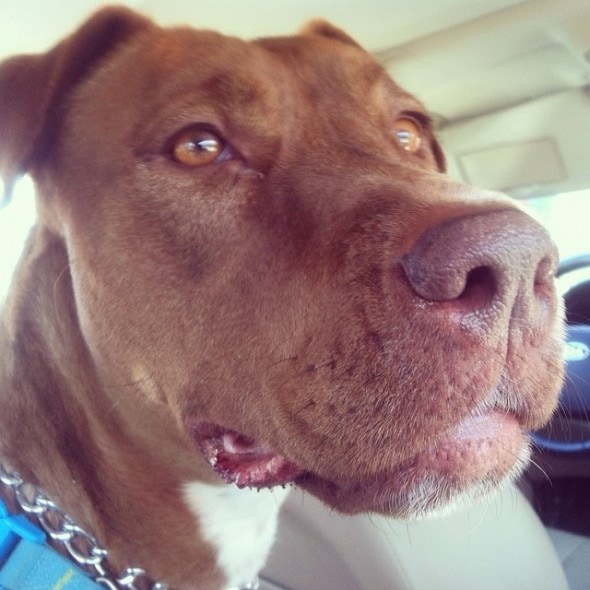 A few months ago Shadow was found by hikers with two other dogs in a cage. They had been abandoned in the middle of nowhere with bullet casings surrounding their cage. Rescued by Marley’s Mutts Dog Rescue, Shadow took a turn for the worse last week when she started coughing up blood because of a bullet in her lung. Now Marley’s Mutts is doing everything they can to save her.

Marley’s Mutts received a call from an animal control officer after hikers had found Shadow, her brother Clancy and another dog that had passed away locked in a cage in the middle of nowhere. Bullet casings surrounded their cage and an initial examination of both dogs showed no bullets in either one.

Marley’s Mutts went to work to help rehabilitate both Shadow and Clancy and find them good homes. After months of rehabilitation Shadow was placed in a good home and life was looking bright. Then on Friday she started coughing up blood and her new owner called Marley’s Mutts for help. She was rushed to a vet where another examination showed that she had in fact did have a bullet and it was in her lung that had gone undetected up until that point.

Shadow needed emergency surgery and she needed it soon. Marley’s Mutts quickly got to work and started mobilizing to get her to Los Angeles for the surgery. By Saturday afternoon Shadow was at VCA in West LA and on Sunday morning she went in for surgery.

A .40 caliber bullet was removed from Shadow’s chest during surgery. It is a miracle that she was even able to survive. The surgeons also had to remove one of the lobes of her lungs. The 48 hours after surgery will be critical for Shadow and she will be closely monitored.

The cost of Shadow’s surgery care is growing by the day and Marley’s Mutts is reaching out to its fans and animal lovers to help Shadow. They have set up a fundraising page online where you can make donations and read more about Shadow’s incredible rescue story.