In Mason City, Iowa last week, a rescued dog got a chance to repay the favor to her human, by rescuing her after a terrible fall left her human injured, and helpless.  Now, Dee Greenan and family hail the Pomeranian as a family hero.

It all started when Dee had let Peaches outside, the same way she would have any other day.  It’s just at that moment, Peaches decided she would go tearing across the yard, making like she was going to take off.

Dee wasn’t sure what Peaches was going to do, and she panicked a bit.  She shot out the door after Peaches and lost her balance.  She toppled over with some foreword momentum, causing her to fall off the porch and into the bushes, hitting her head on the rocks in the flower bed.

“Here I was in the bushes and needing help. I could not get up because I have a crippling disease,” said Dee.

“My wife and I were on the south side of our shed and we had been out there so we couldn’t hear any phones or anything and all of a sudden, here comes this little Pomeranian dog,” said Dee’s neighbor Don Gettner.

Had Don not seen Peaches come into the yard, and he didn’t know who she was, things could have ended up much worse for Dee.  He grabbed Peaches and took her home.  When he got to Dee’s front yard, he got quite a shock.

“Here we found Dee laying on the rocks underneath the bushes,” said Don.

Emergency services was called straight away, and soon, EMTs were on scene patching Dee up.  All in all she suffered a mild concussion and some bruises and scrapes, but still considers herself lucky that Peaches decided to go where she did.  Everyone involved hails Peaches as a in the situation.  Dee said she’s very lucky. 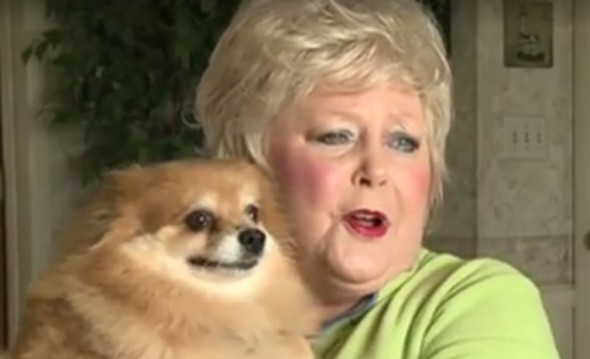