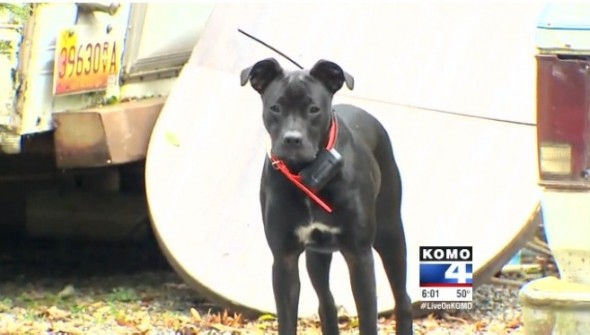 Ninety-three-year-old Bill Flowers was shocked when his rescue dog, Liberty, dragged a human leg to their Washington home on Tuesday. But the discovery led to the remains of a person whose death is now able to be investigated, thanks to Liberty.

Dogs love smelly things, and in their eternal quest to please, love to bring smelly things home for their humans to love. But Bill Flowers never expected that his boxer-Lab mix Liberty would bring an entire human leg to their Nisqually Indian Reservation home.

“I examined it,” Flowers said. “I picked it up, and looked at the toes and nothing. None of the leg or foot was damaged – from the knee down it wasn’t damaged at all.”

He said it appeared gray, and looked to have been severed about four inches from the buttock. Scared that he would be suspected of murder, Flowers panicked and buried the leg in his backyard.

“My dad did not know what to do,” explained his daughter Cheryl Flowers, who was the one to rescue Liberty. “He picked it up, put it in a plastic bag and buried it. He was panicked.”

At his daughter’s urging, Flowers unearthed the leg and called police.

“You see it on TV but you don’t expect …” Cheryl said. “And my dad, that had to just shock him into really not knowing what to do. I can’t even imagine what went through his head. He’s a World War II vet and all he thought was, bury it.”

Detectives believed him, and thought Liberty might be able to help find the rest of the body. They fitted her with a GPS collar, but she did not find anything else. However, other search and rescue dogs did.

Thurston County Coroner Gary Warnock said a “pretty complete set” of remains were recovered from an old fish hatchery, including the legs, rib cage and a skull with the jawbone and teeth.

“We’re going to look for any tool markings to see if there were any tools [used] to dismember it or if it was dismembered by animals,” Warnock said. “Tomorrow we’ll begin the process of starting to put everything together as far as age, sex, identification and how the person died.”

Detectives will be checking missing persons and runaway reports for a match.

Cheryl has “no idea” who the person was. “I just pray for the family,” she said.

Hopefully Liberty’s discovery will bring information and closure to the deceased person’s loved ones.