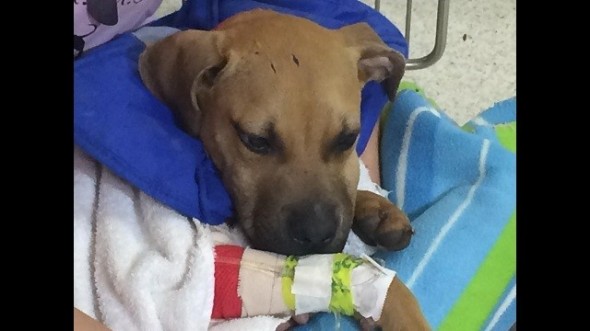 A rescue group from Central Florida was alerted to a dog that had been mercilessly dumped in a field so beaten up and bloody, it was almost impossible to tell if the dog was actually still alive or not.  After an exhaustive rescue effort, this dog thought to once have been used as bait for a dog fighting ring, now has a second chance at life.

The dog’s original name was Jonah, and when he arrived at the vet clinic he was brought to, medical staff knew time was of the essence.  He was immediately admitted, and they performing the emergency surgery needed to save his life at once.

After the surgeries were complete, Jonah, or as he is known now, Champion, hung around the animal hospital to kind of recuperate and be a bit more closely monitored for any complications that may have shown up post-surgery.

Once medical staff was satisfied that he was mostly out of the woods so to speak, he was then sent on to Me and My Shadow Dog Rescue.  That’s where he met up with the rescue group president Julie Galante, who gave him his seemingly better fitting name of Champion.  Julie believes that after everything he went through being a bait dog and surviving and still having a sweet even if timid disposition, that more than qualifies him for his new title.