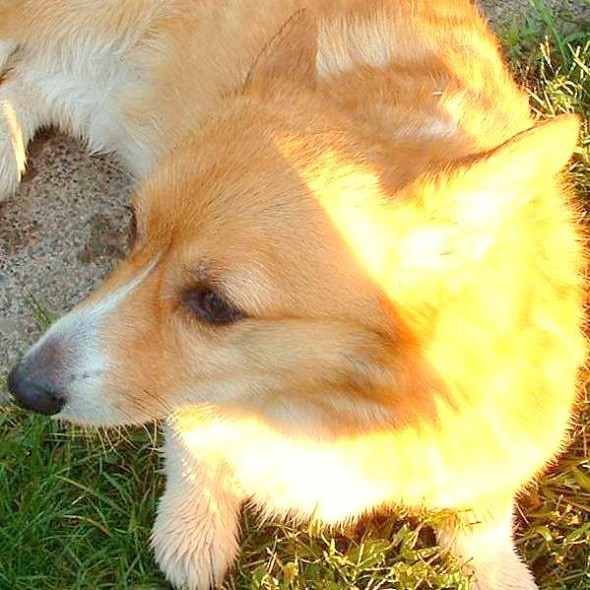 We heard of a little dog that her owner wanted to get rid of – an incredibly friendly eight-year-old female Corgi named Ginger. We couldn’t quite understand why, but the owner explained that her boyfriend just didn’t like her, they were tired of carrying her down the porch stairs to go potty (Ginger’s short legs couldn’t manage the stairs), and worst of all, their larger dog used her as a toy, commonly kicking her around like a soccer ball.

We were completely disgusted, but decided to show a brave face and asked if we could take this little girl home with us.

A short time later, we placed Ginger onto our grassy lawn and attempted to introduce her to our first dog, a four-year-old, very lovable Beagle. She immediately freaked out, not only from being in presence of another dog, but of the grass as well. We later found out her previous owner never took her for walks, and kept her locked in a sky kennel most of the time that was SO SMALL, she couldn’t even turn around inside of it. When outdoors at her previous home, Ginger was only used to concrete underfoot; her lead was a six-foot leash, much too short to reach the grass.

It took weeks for Ginger to acclimate to her new surroundings; surprisingly she got along with our cat, but she frequently nipped at the rest of us in fear. With tons of patience and lots of love, she became our precious little Gingy Girl.

Fast forward six years – Gingy Girl’s health is declining. We know it won’t be long before she’ll be crossing the great Rainbow Bridge. But nonetheless, it warms our hearts knowing we’ve given her exactly what she deserved all along – a true, LOVING forever home.