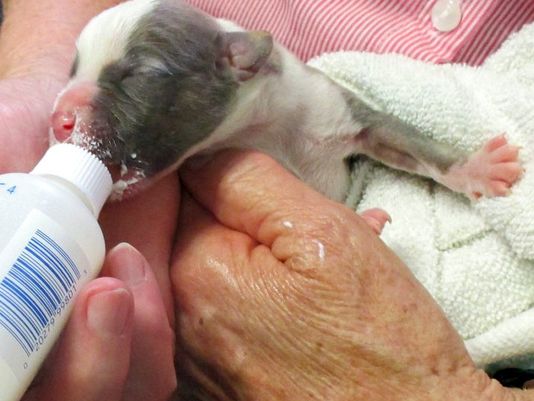 There were a total of seven puppies found tied up and left on the side of the Blue Ridge Parkway in Haywood County, North Carolina.  Haywood County Animal Control was called out to the scene, and Officer Frank Goodson was the one who responded, and got the puppies out of there and to safety.

According to Sarge’s Animal Rescue Foundation operations manager Debi Slater, “The puppies looked to be only two days old.  They were cold, wet and hungry.  We don’t have the details about who found them, only that they ended up at the county shelter.”

Leyah Pilkington is the assistant director of the shelter the pups were brought to, and she took them in overnight to make sure they stayed dry, warm and fed.  The following day, the pups were taken to the rescue facility, where they will be raised to the proper age and health for adoption.  There are two males, and five females in the litter.

Slater now has the task of finding good forever homes for the puppies once they are of age.

Slater said, “We got busy and started calling people to bottle feed the puppies every two hours.  The offers to help came in, and Janice Jobson took three puppies and Christy Swanton took the other four to foster.”

Considering the expense of bottle feeding and care for the infant pups, a fund has been set up for the pups.  You can get more information or make a donation by clicking here.

“Sarge’s has already spent $100 on bottles and formula to feed the puppies,” said Slater.  “When the puppies are old enough for medical, it will cost upwards of $150 per dog for shots, spay-neuter and veterinary care.”

Steve Hewitt is the board president of Sarge’s, and was the one responsible for setting up the fund raiser for the abandoned pups.

Hewitt said, “Virtual sponsorships will be accepted to the Parkway Puppy Fund.  People can contribute $20, $50, $100 or more by liking Sarge’s on Facebook and hitting the ‘donate social’ button on the Facebook page.  Or, concerned animal lovers may donate on the Sarge’s website by using PayPal or credit cards and designating Parkway Puppy Fund (PPF) in the comments section.”