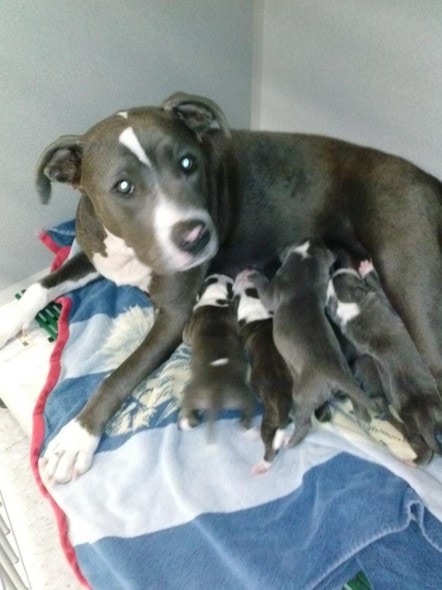 When Panda Paws Rescue was informed about a Craigslist ad selling three-day-old pit bull puppies they didn’t hesitate to act. Panda Paws Rescue founder Amanda Giese obtained as much information as she could and then contacted authorities in Fontana, California who came to the aid of the puppies and her mother.

A 24-year-old woman posted an ad offering for sale 3-day-old pit bull puppies. When Panda Paws found out about it they were horrified. Although located in a different state, the rescue didn’t hesitate to help. Knowing the puppies lives were at risk Giese worked to obtain proof of what was happening. As soon as she had confirmation that the ad was real, she contacted the Fontana Police Department for help.

Officer Jamie Simmons with the Fontana Police Department went into immediate action. Officer Simmons removed six puppies and their mother from the woman’s custody by Tuesday night. Officer Simmons placed the puppies and mother in medical care with a local veterinary clinic. A seventh puppy was sold on Monday, and its location is unknown.

The puppies and mother are currently in foster care once they are able to be safely transported they will be taken to Panda Paws Rescue in Vancouver, Washington. Wings of Rescue will be helping to fly the dogs to Washington. The puppies will be available for adoption once they are over 8 weeks old, vaccinated, microchipped and altered.

The woman who was selling the puppies is facing numerous charges. The investigation is ongoing and more details about the rescue are not yet released.