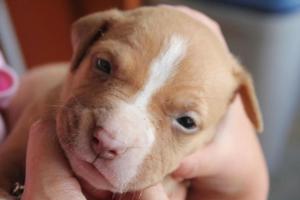 Cynthia Sweet, an owner of an animal rescue in Massachusetts, was trying to help a puppy in need when she discovered a need to make a change to the law in Massachusetts.

Sweet learned of a 3-week-old Bubba, a puppy that was owned by an 18-year-old pizza shop employee. The employee had purchased the puppy from a breeder. At only 3-weeks-old the puppy was not yet ready to be away from its mother. “The puppy would have died,” said Sweet. Puppies need their mothers’ milk until at least 6 weeks of age, until then they are not able to lap water nor do they have any teeth. It was through Bubba’s situation Sweet learned that there are no laws in Massachusetts that regulate dog breeders. As such, the breeder who sold Bubba at such a young age did nothing illegal under Massachusetts law.

Sweet took care of Bubba, the owner allowed Sweet to place the puppy with a nursing rescue dog until the puppy was able to eat kibble. Now Sweet is determined to do something about the law so that other puppies don’t end up in situations like Bubba’s. Michael Cahill, who is the director of the state Divison of Animal Health, confirms that there are no current laws overseeing breeders. Pet shops, rescues and shelters all have regulations, but breeders have remained unregulated. Sweet wants to get breeders on the same regulations that rescues and pet shops have.

Sweet thinks breeders should be subject to other regulations in addition to the simple age standard. Often the effects of irresponsible breeding and the medical and behavioral issues it causes leads to animals being surrendered to the shelters and rescues. “We’re picking up the pieces and we’re regulated,” said Sweet. “It’s highly unfair that breeders aren’t.”

Cahill did state that there is pending legislation that would require breeders to wait until 8 weeks to sell puppies or kittens. The proposed legislation is beginning to gain some ground and a vote could occur by the end of the year. Until then Sweet continues to work to help dogs like Bubba, who is doing great with his adoptive mom.