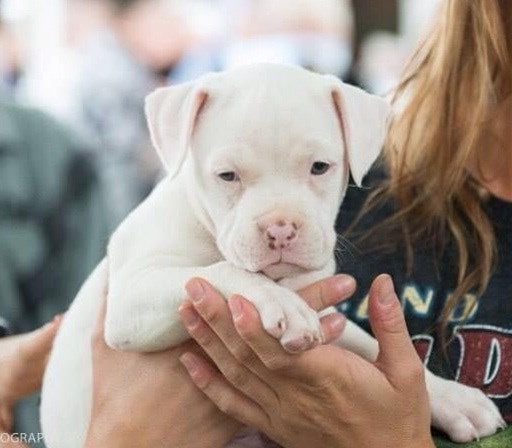 Trooper is a nine-week-old puppy that is in need of life saving surgery. The pit bull puppy suffers from a congenital heart defect and the animal rescue Pit Pride is raising funds to save his life.

Pit Pride, a rescue organization based in Frederick, Maryland rescued a litter of puppies when they were just hours old. Trooper was the only male of the litter and instantly captured the hearts of his rescuers. They soon found out though that not only was Trooper deaf but there was something wrong with his heart. Trooper has pulmonic stenosis and without surgery he will not survive.

Now the rescue is determined to raise the funds and save Trooper’s life.

“Ever since he was born, everyone who meets him loves him, and it’s really important to us to save his life,” said founder of Pit Pride, Katie Makrides.

The surgery will cost at least $4,000. Pit Pride has set up a Save Trooper Facebook page and a fundraising page on YouCaring.com. So far almost $3,500 has been raised to save Trooper’s life.