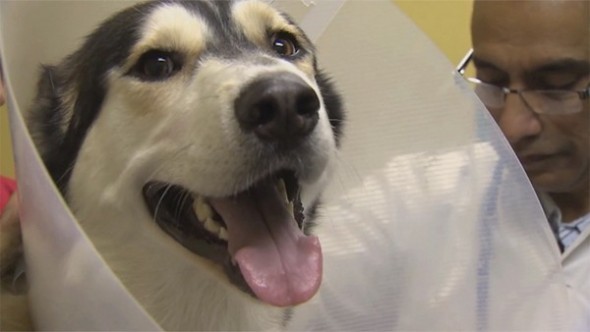 A British Columbia family is searching for answers after the missing Husky Sabre returned home with serious injuries.

Sabre, a two-year-old Siberian Husky, went missing from Lisa-Marie Shymkowich’s home on Tuesday night. When she found him the next morning in her driveway he was in bad shape.

“I went running outside, in my pajamas and he was…we were just doing an assessment, of what was going on, and that’s when we noticed all the gruesome injuries,” said Shymokowich. “Just meat, just like, it was just a raw flesh smell. It was awful. It was horrible, and the blood was gushing out from his paw and his bone was exposed. It was horrible.”

Sabre was rushed to Cheam View Veterinary Hospital where he underwent emergency surgery that lasted over four hours. Dr. Kuldeep Chahall treated Sabre and believes that because of the nature of Sabre’s injuries he was most likely hurt by a person and not another animal. Sabre’s injuries were complicated and lacked teeth marks or normal markings of an animal-fight.

The Shymkowichs have posted a complaint with the RCMP and are hoping someone will come forward with information to shed light on what happened to Sabre.

The community has rallied around Sabre, after a friend posted about the ordeal on Facebook donations have flooded in to help pay for Sabre’s expensive treatment and care.