Rescued Bait Dog Found to Have No Tongue 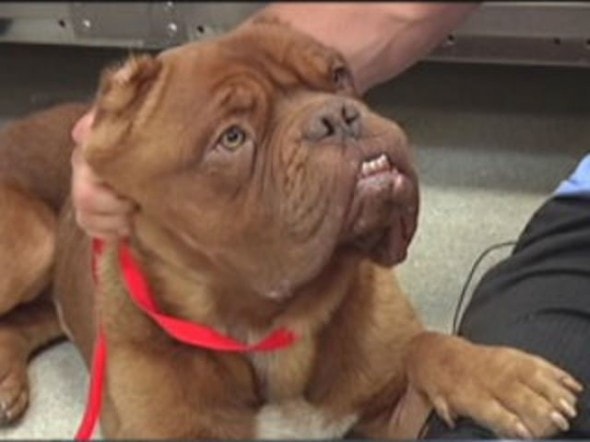 When a stray French Mastiff named Hooch was rescued in California his rescuers had no idea just how badly he had been abused. The rescue organization Marley’s Mutts has seen lots of cases of horrible dog abuse but what they discovered about Hooch shocked them.

Zack Skow of Marley’s Mutts rescued Hooch and brought him to the San Joaquin Vet Hospital. They were trying to figure out what was wrong with Hooch’s jaw and why he was struggling to eat, so they took an x-ray of his mouth. That’s when they made the horrifying discovery, Hooch didn’t have a tongue.

“His mouth didn’t have a tongue,” said Thomas J. Willis of San Joaquin Vet Hospital. “Absolutely no tongue at all, not even a stump.”

In addition to having no tongue, Hooch’s ears were not docked but actually chopped off. The vet and rescuers believe Hooch was used as a bait dog, and his tongue had been pulled and cut from his trachea.

“I can’t imagine the pain he has been through or how he has survived up to this point,” Skow posted on the Marley’s Mutts website. “Dogs need their tongues to perform a variety of essential actions such as eat dog food, drink water and PANT – dogs don’t sweat and rely on their tongues to help regulate temperature.”

With no tongue, the vet is equipping Hooch with an external feeding tube so he can take in nutrients and his life can be saved.

Despite what Hooch has endured and lost, rescuers say he hasn’t lost his heart.

“It tugs at my heart to think that somebody could do this to this poor dog,’ said Andrea Bertolucci, who works at the San Joaquin Vet Hospital. “He’s such a sweetheart and he just wants to be loved.”

To help provide for Hooch’s care you can make a donation by visiting his fundraiser website.