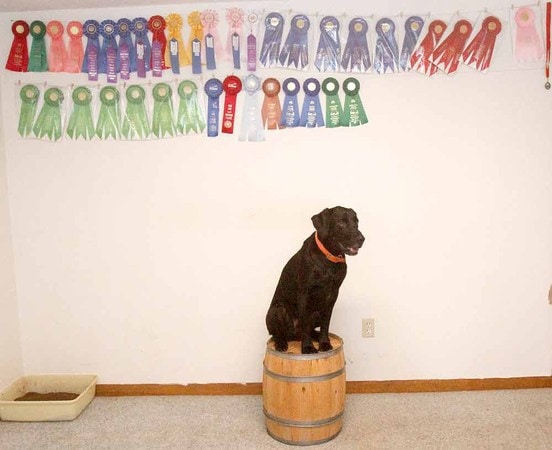 Today a black lab named Nemo will be competing in the 2013 National Rally Competition in Tulsa, Oklahoma. Nemo is a rescue dog who had been labeled “a mess” by many, but was given a chance when Kristi Koltavary gave him a home and an outlet for all his crazy energy.

Koltavary agrees that Nemo was somewhat of “a mess” when she first met him. “He would shred everything in sight, he was fearful, timid and didn’t make friends easily,” she said. Koltavary didn’t shy away though and saw Nemo as a “crazy awesome challenge.” She accepted the challenge and brought him home with her. Koltavary is used to the energy and an ability of black labs, Nemo is her eighth one. Knowing he had a lot of energy and athleticism she decided to introduce Nemo to competitive Rally sports.

According to the AKC, “AKC Rally is the new dog sport that is taking the nation by storm, a successful stepping stone from the AKC Good Canine Citizen program to the world of obedience or agility.” A rally course has 10 to 20 stations. At each station the handler and their dog must perform a skill. It is similar to traditional obedience but the scoring is not as rigorous.

Nemo made his first step towards competing in AKC Rally when he earned the AKC Puppy Star Award at less than a year old. He also honed his skills by joining Dog Scouts Troop 188. In only three years he has advanced from a Rally Novice to the highest Rally level, Rally Excellent. In January Koltavary found out Nemo was accepted to compete at the National competition in Tulsa. Koltavary is excited to compete with Nemo. “Everyone loves winning, but it’s really about having fun together,” she said.