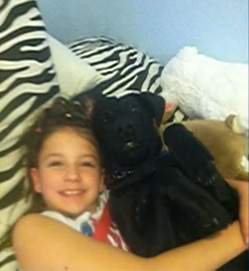 When a Fort Worth, Texas family sent their dog to Virginia for training, they thought she’d be gone for two to three months.   But now they don’t know if they will ever see her again.

Beta is a black lab that 11-year-old Kylie Calvert depends on.  Kylie has diabetes, and Beta is a diabetic alert dog that helps moniter her blood sugar.  If it becomes too high or low, Kylie could become dangerously ill.

“The bond between the two of them, I mean, they’re inseparable.  [It’s] absolutely amazing to see them together,” said Mindy Calvert.  “There’s just so much joy when they’re together.  Beta lights up and follows Kylie around, and I just hate to see them apart right now.”

The Calverts got Beta six months ago from Service Dogs by Warren Retrievers, based in Orange, Virginia.  The family realized the 10-month-old dog still needed a bit of training, and sent her back for a couple months.

During training, some horses spooked Beta and she ran off near Steubin Lane in the West Key neighborhood last week Friday. 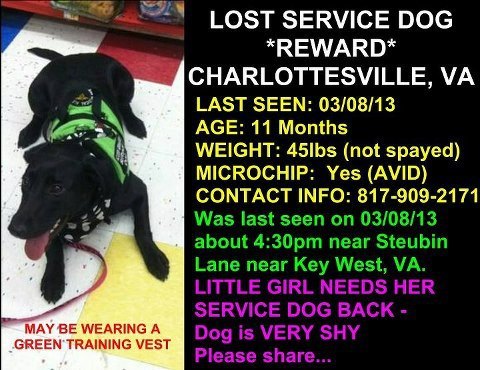 “I’m not there, I’m not in Virginia,” Calvert explained.  “So, it’s really hard for me to know exactly what’s going on.  I can’t personally pass out fliers and I can’t go knocking on doors and say, ‘have you seen her?’”

Dan Warren and the Calverts are desperate to have Beta back, and urge anyone with information to please come forward.

“It’s a desperate plea for someone to do the right thing, turn this dog back in, contact us,” Warren said.  “There’s a girl dependent on this medical alert, diabetic alert dog for this organization to promptly return this dog back to the rightful owner, which is that family.”

Anyone who sees Beta or knows where she may be should contact the Albemarle County Police at (434) 296-5807.