Rescued Calf Refuses to Believe He’s Not a Puppy

The calf was in line to be slaughtered for veal when he was rescued, says high school senior Shaylee Hubbs, whose family has a ranch in California.

She told ABC News that Goliath was “so weak and so small that he couldn’t stand and you could pick him up very easily.”

Now the eight-week-old calf is healthy and strong… at least physically.  Mentally, well…. The little guy is a bit confused.  Or not – maybe he’s just a dog born in a cow’s body. 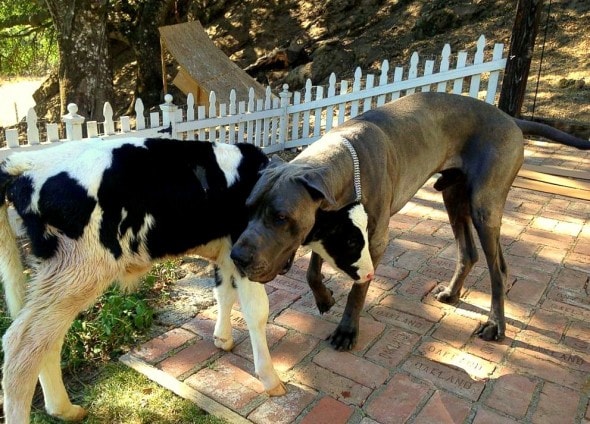 “I’m pretty sure he thinks he’s a dog.  He was raised with our three dogs, and he’s around them every day,” Hubbs explained.  “They chase and play together, he watches how they eat their dog food and drink water from their bowls, and copies them and he even lays in their dog beds. He even loves scratches on his neck around his ear.”

And like the dogs, he feels he belongs inside.  Recently he’s taken to sneaking inside and snoozing on the couch, thanks to their two-year-old Great Dane, Leonidas.

“He’s best friends with Leo, and so he used to watch Leo push down the door handle and come and sit on the couch.  And of course, he now knows how to come in, too. He just pushes down on the knob with his head and lets himself in and onto our couch.” 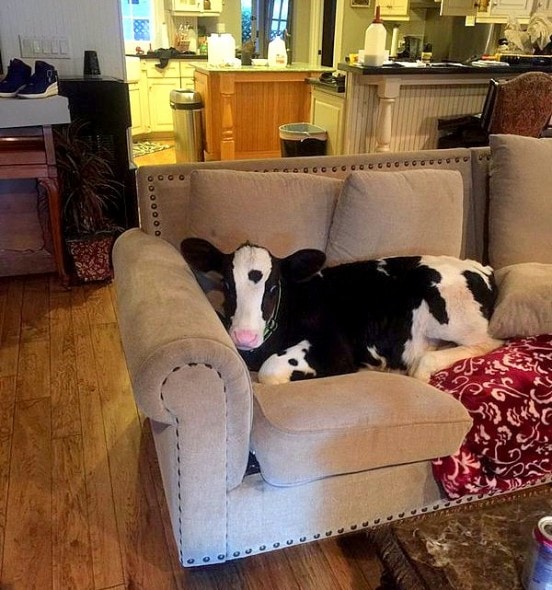 Which is probably just what Leo wanted.  When Goliath first arrived, Leo was the one to take on the nanny role.

“He would lick the little cow on the face and try to nudge him to stand up,” Hubbs said.  “He would lay down with the sick, little cow for hours just to keep him company.”

Goliath even tried to nurse from Leo, but obviously was not very successful.  He was fed milk, but opted for dog kibble instead.  Soon he’ll be too big for the couch, but the Hubbs say he’s welcome to stay on their ranch for life, along with their horses, goats, sheep, alpacas, dogs, and chickens. 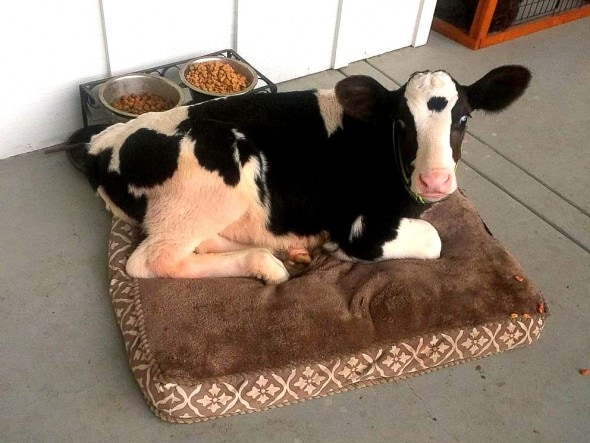