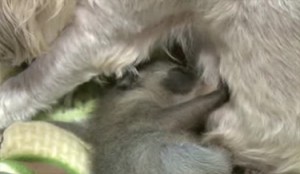 The circle of life takes a beautiful turn after a dog loses a puppy, only to adopt an orphaned baby raccoon.

Dumped at a Missouri shelter, Sasha was facing possible euthanization until local rescue group SNUGGLE stepped in and rescued her. A large lump in her abdomen raised concerns about a possible tumor until an ultrasound revealed that she was pregnant with two puppies. Sadly, when the big day arrived, one of them was stillborn.

At the same time an orphaned baby raccoon was discovered huddling in a carport in St. Charles, MO. The needy baby was brought to the Pet Doctor pet clinic in O’Fallon, MO – the same clinic that was caring for Sasha after she gave birth. Vets were quickly overwhelmed by the feeding schedule of the young raccoon. “We started off bottle feeding it and just couldn’t keep up with its needs,” Dr. Kelly Hogan said.

Dr. Hogan and her staff decided to try an unconventional idea – and introduced the hungry youngster to Sasha. They were thrilled with the outcome.

“She accepted him within an hour.  She was fabulous with him.  Even when he started making little ‘raccoony’ kind of noises, she didn’t have a problem with it,” Dr. Hogan said.  “She loves him.  She’s protective of him now…she’s watching him.  She’s his momma!”

Now Sasha spends her days caring for her two youngsters, cleaning and grooming each of them – and even letting clinic staff know she’s not happy with them when they take the baby raccoon for exams by jumping and whining until it is returned to her. “It’s kind of amazing you know, two different species like that,” Dr. Hogan said.

SNUGGLES rescuer Sharon Maag said she feels it’s only natural that the arrangement worked out. “Because it’s a baby and she lost a baby; maternal instincts.  We saved her life and she saved a life,” she said. Maag points out that in time, the raccoon will be weaned before being released into the wild.

Sasha and her puppy will soon be available for adoption, but if you just can’t wait to see more of them, stay tuned to a new webcam that is expected to go live today on http://www.thepetdoctorinc.com.