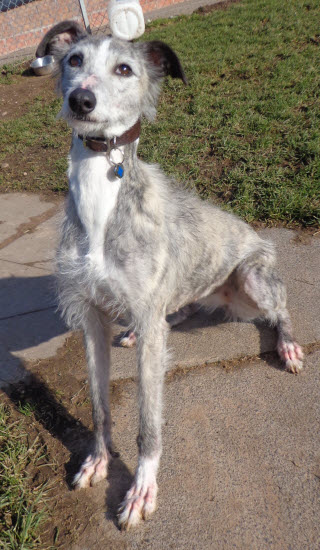 In January Bliss was rescued from an animal hoarder’s home in Ireland. Once she arrived at Bromsgrove’s Blue Cross the shelter feared they would have trouble placing her because she has an unusual allergy to grass. Bliss won over many with her personality and adorable face and despite her allergy found a home quickly.

When Bliss, a four-year-old lurcher, arrived at Bromsgrove’s Blue Cross in January she had sore inflamed skin on her nose and the skin on her paws was almost gone because of her allergy to grass. The shelter had experience with another dog with the same rare allergy and feared they would not be able to find her a proper home in Bromsgrove. They considered moving her to another shelter, but Bliss was quickly gaining a lot of interest from potential adopters.

Once Bliss received treatment for her allergy she was ready for a new home and Sue Rothwell was happy to give it to her. Rothwell has a paved yard and is planning to buy Bliss special booties for her to wear so she can play with other dogs. “I’d like Bliss to be able to run around on the grass with the other dogs when we go for a walk,” said Rothwell, who is thrilled to have Bliss at home with her. “She is absolutely fantastic.”