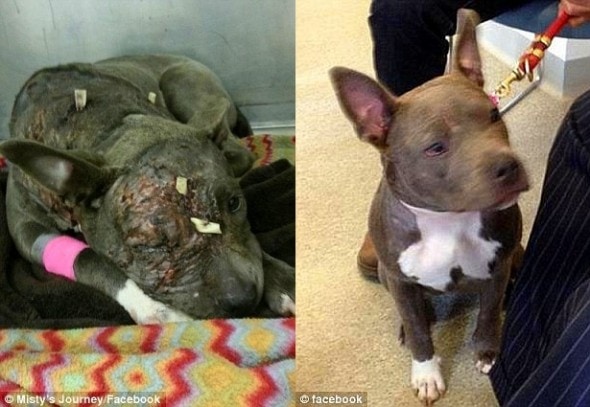 Erin Earley-Hamilton has helped save the lives of more than 100 dogs thanks to the love she found after adopting Misty, a dog-fighting ring survivor, who was found on a Brooklyn street and rescued in April.

Eight years ago, Erin’s boyfriend at the time adopted a pit bull who “came in, pooped on the floor, and I was in love,” she said.

Since then, Erin, who works for the ASPCA, has devoted her time to saving abused dogs. Former bait dog Misty became a bit of a celebrity after she was found, and Erin adopted her from a city shelter. She manages Misty’s Facebook page, which has over 90,000 fans. The page has helped NYC’s Second Chance Rescue save dogs that otherwise wouldn’t have even been given a chance.

“It’s been a very powerful tool,” said Jackie O’Sullivan, a partner at Second Chance. “I won’t lie. We always wanted Misty to pay it forward and she’s constantly doing that. She’s helping so many dogs who would have been put down.”

Almost daily Jackie and Erin post a photo of a dog that needs help, be it with medical care, rescue from a kill shelter or adoption.

“It always feels like an uphill battle,” she said. “There’s always a dog that needs a home. Always one that’s being euthanized. Always an injured animal. You never feel like there are enough homes for them. It’s discouraging because sometimes you don’t have enough resources to spread the word and reach people.

“But having a vehicle like Misty’s Journey really makes it possible. It makes you feel like a change is possible. Some other rescue operations do it on a smaller scale every day.”

While changes come slowly, they certainly do happen, and every little bit helps. Shannon Williams was scrolling through Misty’s Journey in June when she came across a story that just broke her heart. A mother and her puppy were going to be put down at a North Carolina shelter. The mother had been left tied to a radiator with her six puppies in a deserted house. Sadly, five of the puppies died, but one was still clinging to life, and the shelter wasn’t even going to give it a chance.

Shannon’s sons pleaded with her to adopt the fledgling family. Two days later, the dogs were flown to her city, and after meeting with Erin, became a part of Shannon’s family.

“Erin is one of the most committed and kindhearted individuals I’ve ever met,” she said. “Her commitment goes beyond just helping these animals. She’s an outstanding humanitarian.”

Erin’s not the only one helping – Misty most recently signed “pawtographs” at a rescue pet adoption day in an effort to raise money for rescue groups.