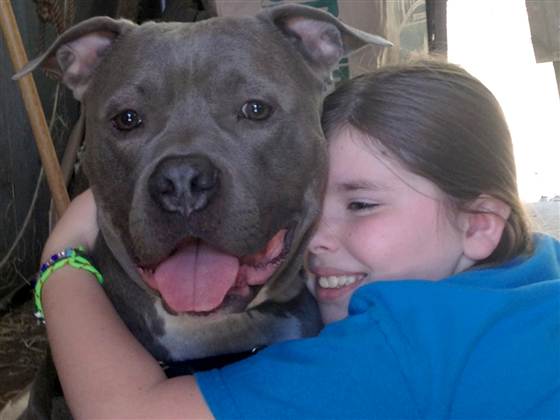 Three years ago Jeffrey was just one of the hundreds of pit bulls in the New York City shelter system and his future didn’t look bright. Then he was rescued just in the nick of time and now he is helping others as a certified therapy dog. One of his favorite clients is a 9-year-old survivor of the tragic Sandy Hook shooting.

When Jeffrey was in the New York City shelter three years ago it seemed likely that he would be euthanized. Then a group called Bruised Not Broken noticed just how special he was and tried to find him a home by posting about him on their advocacy website.

Bruised Not Broken’s efforts worked when Michele Houston spotted the post on Jeffrey and adopted him just hours before he was scheduled to be put down. Houston enrolled Jeffrey in obedience training and he then took the Canine Good Citizen Test.

“He passed with flying colors,” said Houston. “The examiner, he said if you don’t make this dog a therapy dog it would be a shame.”

Now Jeffrey goes to assisted living facilities, hospitals and school libraries to help people.  There is one particular person Jeffrey has formed a special bond with though. Emma Wishneski is a 9-year-old student at Sandy Hook Elementary School in Connecticut. On the day of the tragic shooting Emma was fortunate enough to be late to school because of a doctor’s appointment. Some of her friends weren’t as lucky though and Jeffrey is helping her to cope with that loss.

The two first met in December, only weeks after the shooting. Jeffrey instantly brought comfort and security to the little girl.

“It was still a really vulnerable time for her, and she just was comfortable sitting next to Jeffrey,” said Emma’s mother, Marykay Wishneski. “He’s strong and I think she just feels safe.”

The day after meeting Jeffrey Emma asked her mom if she could see him again. Now the two have regular play dates and Jeffrey even came to Emma’s birthday party in April. Emma smiles a lot more these days because of Jeffrey and has helped train her own family’s dog, Jedi, to become a therapy dog as well.

As Emma prepares to go back to school this fall she is still coping with the last year’s tragedy, but she plans to take a stuffed version of Jeffrey with her to school.