Rescued Puppy And Autistic Boy Helping Each Other 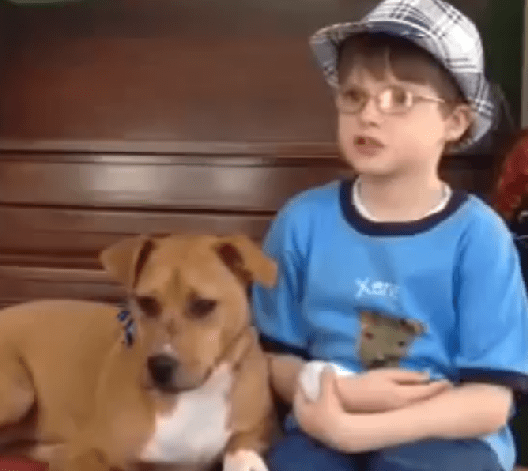 Xena is an incredible puppy that has survived horrible abuse. Her story has touched thousands. Now fully recovered Xena is helping others, especially one little boy with autism.

In September Xena was found abandoned and so emaciated she was on the verge of death. The rescue group Friends of Dekalb Animals miraculously nursed her back to health. Her recovery was soon all over Facebook and her story was helping to raise thousands of dollars for the care of abused animals. Lynn Herron of Friends of Dekalb Animals says Xena’s followers on Facebook have donated around $30,000. That money has helped establish the Xena Shelter Fund to help severely abused and injured animals like Xena.

Xena doesn’t just help raise money with her story on Facebook, but helps with Friends of Dekalb Animal local fundraisers as well. It was at a fundraiser last November that Xena would have a chance meeting with a little boy. That meeting would change both of their lives. Jonny Hickey and his dad were at the fundraiser when Xena ran up to them and greeted them. Jonny has autism and he had become a very withdrawn boy that didn’t enjoy interacting with others. However with Xena he felt comfortable and the two instantly bonded.

When Xena was fully recovered in March she became part of Jonny’s family and the two friends have been by each other’s side ever since.  Jonny has become more talkative since Xena has come into his life.

As it turns out April is both “autism awareness” month and “prevention of cruelty to animals month” and Jonny asked his mom if he could make a YouTube video to bring awareness to both these causes. In the video Jonny states, “My name is Jonny and this is my puppy, Xena. Well, my Xena was hurt real bad by some not-so-nice people. And I have autism. So I think we make a pretty perfect team to spread the word to be nice to animals, and nice to kids like me.”

Their special video can be seen below: