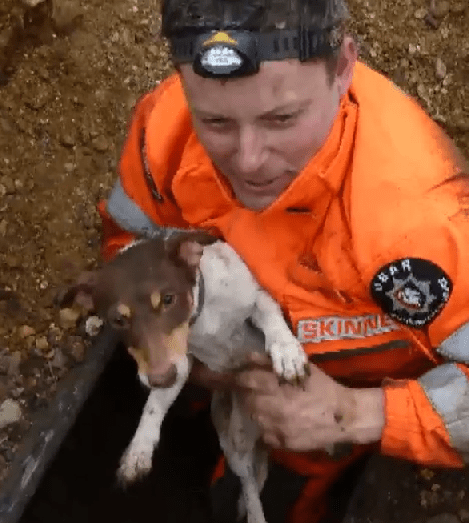 For four days Lulu was trapped underground in a drainage tunnel. It took firefighters over six hours to rescue the Jack Russell Terrier.

Gina Kaiser was taking her dog Lulu for a walk last Friday at Boveney Lock in Dorney when the dog ran into a 60cm-wide pipe and got stuck. Lulu tried to turn around but because of the narrowing of the pipe due to rubble she became stuck.

When Kaiser called the RSPCA for help she was told to wait out the dog and that if she could hear Lulu barking then most likely the dog would be able to find her way out. For four days Lulu barked and Kaiser became desperate and decided to take matters into her own hands. She rented a machine to dig Lulu out of the pipe herself.

Someone passing by alerted the fire department to the situation and they stepped in and took over the rescue mission for Kaiser. “Lulu’s owner had organized her own search, but the situation was in danger of becoming hazardous,” said firefighter Doug Gruchy. “We took the decision to carry out this rescue because of our concern for the safety of her search party as well as for Lulu’s welfare.”

For six hours five firefighters used Kaiser’s rented digger, spades, shovels and other equipment to dig eight feet to the pipe underground. Once they reached the pipe they broke through it and brought Lulu to safety. Lulu had survived on water that had collected in the bottom of the pipe and was doing well considering her long ordeal. Firefighters have since closed off the entrances to the pipe on both ends to prevent future incidents.