A golden retriever who was rescued from the brink of death last year has saved the people who welcomed him into their family.  On the night he was left with his owner’s son to be dogsat, Teddy sensed something was wrong and immediately went to alert them.  The family was able to escape the deadly blaze just moments before it would have been too late.

Teddy was found emaciated in a western New York park last year, but as of late has been living the good life.

“He wasn’t in as good shape as he is now,” said William Vanzandt, whose mother adopted Teddy. “He was skin and bones when she got him.” 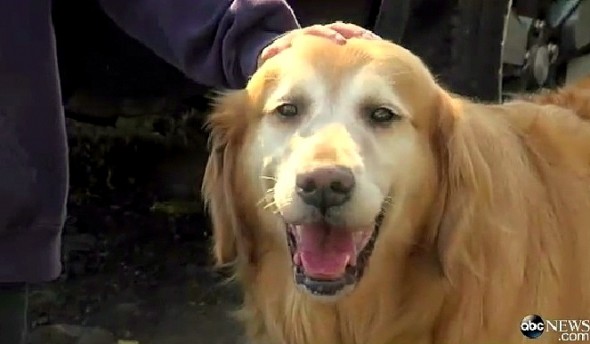 The woman recently left to travel outside of the country, and on Sunday left Teddy in the care of William and his fiancée Kelly Sewert and their two young sons in their Livonia home.  Around 2:30 Monday morning, Teddy went upstairs and woke Kelly.

She says it was unlike Teddy to come upstairs, so she knew instantly that something was wrong.  She smelled smoke and woke William.  They grabbed their boys and along with Teddy, rushed outside.

“Five to ten minutes later, it was a ball of flames,” William explained.  “We just got out of there on time.”

Flames left burning in the fireplace ate through the mortar in between the bricks, causing fire to spread.  The home is a total loss and will have to be demolished. 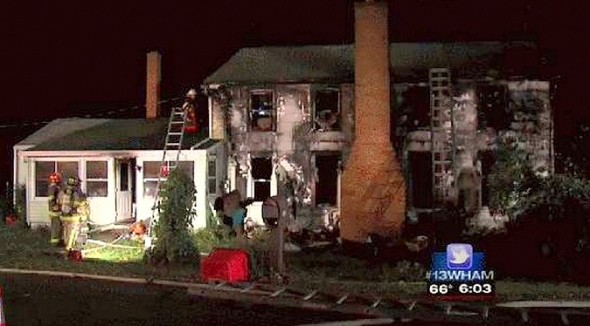 “We lost all contents of the house.  It’s all been destroyed,” William said.

Though they lost everything they owned, because of Teddy, the family is still alive, and gratefully so.

“He’s a godsend,” William said of the heroic dog.

For the time being they are staying in his mother’s house with their rescuer.