My name is Dan Stallings. I founded and run Mid-Atlantic Weimaraner Rescue out of Va. Beach, Va. and I wanted to tell you about one very special rescue who has overcome far more than most dogs – and has not only overcome those obstacles, but has gone on to earn prestigious awards, invitations and entry to some very exclusive events.

Most show dogs live privileged lives, getting only the best of everything available so they are set up to succeed. This particular dog was shown no such treatment, and seemed barely an afterthought to his previous owners. I’m still amazed at his resiliency given the very things he is being judged on in the ring: his confirmation, conditioning, soundness, temperament and attitude were the very things most negatively affected by his prior treatment. Yet he has risen above it all, and accomplished far more than I ever imagined.

He makes me proud and his story is so inspiring that I thought you would like to hear it. 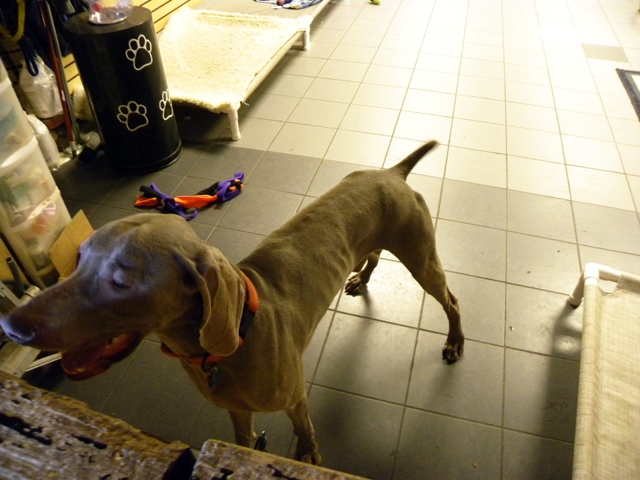 His call name is Maverick. He’s AKC registered as GCh Anson’s Unforgettable (SR43836101). He is appropriately named because his story is certainly unforgettable. He is now a 5 year old Weimaraner, acquired off of Craigslist two years ago after a friend told me about the ad. I contacted Mav’s owner about taking him into our rescue. You see, Maverick was in horrid condition. He was 25lbs underweight, all ribs, spine and hips protruding, he had a staff infection on his nose, a pressure sore on his chest, his nails were grotesquely long, and his paws and tail were raw from self mutilation.

I felt so terrible for him that I bought him off the gentleman (and I use that word loosely) just to get him out of that living environment. Mav was apparently locked in his crate all day and all night which led to behavior problems, self mutilation, chewing, weight loss and his overall poor health. I was able to convince his previous owner to let me have him for a small rehoming fee with his papers, and he was signed over to me.

Upon acquiring Maverick and going through his paperwork I located and contacted the breeder to assure her he was safe and sound now. I found out from her that she had been desparately trying to get Mav back but the owner had moved and wouldn’t return any of her phone calls or emails. She was relieved to know where Mav was and that he was finally in good, caring hands. I’ve told her about every little detail of Mav’s expoloits in the ring too and I could tell she was very proud of him and so happy he was doing so well. She was a great help in getting Mav on the podium where he belonged and taught me alot about the breed and the show world. The breeder and I have over the years have developed a wonderful friendship and working relationship.

I spent weeks trying to get him to eat normally by rebuilding his food drive. I was treating his nose, paws and tail daily for infection and just giving him some TLC, exercise and socializing him with the outside world. About 5 months later, in his second show out, he took the breed and he’s been on a roll ever since. He finished in four weekends and went on to earn his Grand Champion title soon after.

I have attached one of the pictures of what Maverick looked like the very day I purchased him in February of 2010. I also attached a podium picture he has had taken since. Within 7 months of taking him in, caring for him, exercising his mind and body and getting him ready for the show ring, he earned his Champion title. He had no points at all when I first got him. Within another 8 months he earned his Grand Champion title. All on a limited show schedule.

Maverick cannot go out on the show circuit as many successful show dogs do because of the way he was treated in his past. He cannot be crated for prolonged periods or he shuts down, so he can only show when I can deliver him ringside for his handler. I have shown him a few times in his handler’s absence and put a few points on him myself – he’s that good, but I usually have a professional handler on him because I want him to have the best chance to win and show well. 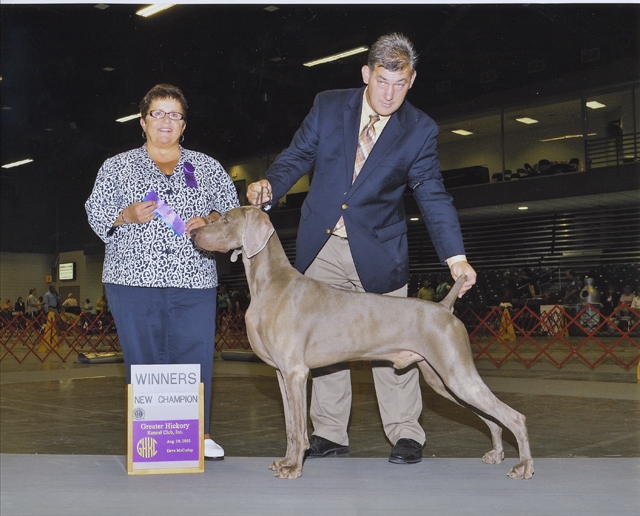 Mav earned an invitational to this year’s AKC Eukanuba National Invitational dog show (held in December in Orlando) where he was stacked right behind the top two male weims in the country, and still he made the cut.

He will be once again taking his place next to some of the best Weimaraners in the country at this year’s Westminster Kennel Club dog show. I could never have imagined the day I got him that he would be taking me to places like this, but I guess it’s his way of rewarding me for saving him. I am so proud of him for all he has done, and what he has become right before my eyes. I just love this dog to pieces.

I’ve seen some people post on the Westminster Kennel Club Facebook page that they are “more of a rescue person” but they do like watching the show. Maverick is proof that you cannot judge a dog without truly knowing where it has come from. I hope that his story might help the unenlightened to see that rescue dogs are not just a bunch of misfits with behavior issues. Sometimes they are just poor souls who had the misfortune of having the wrong owners.

It’s like I tell everyone who knows Maverick. You may not end up with a show winning champion, but when you open your home and your heart to a rescue, you’ll certainly feel like one – and you’ll be your dog’s hero for the rest of his or her life. If you could see how Mav greets me when he comes out of the ring you would know how much this boy loves me. He may not win the show, but he will win your heart.