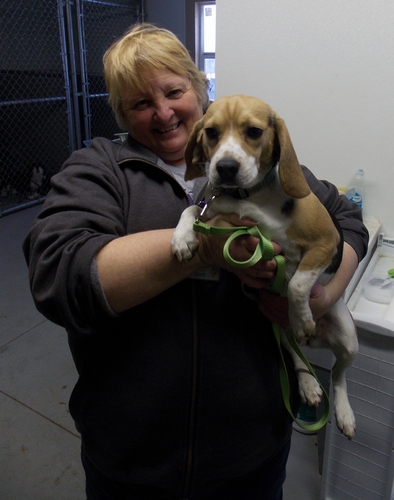 For three days a stray beagle eluded rescuers in the freezing North Dakota weather before she was finally caught and brought to safety. For days rescuers diligently checked a humane trap they had set for the Beagle every two hours until finally Saturday morning their hard work paid off.

On Thursday Jamestown Police Department’s animal control officer Becky Johnson was called in to assist the Stutsman County Sheriff’s Office which had received a report of a dog running around. The Sheriff’s Office had been unable to catch her. “Everybody was worried about the dog being out there at below-zero weather,” Johnson said. The Police and Johnson weren’t only concerned with catching the beagle but also keeping her alive in the cold weather.

Johnson first tried to lure the beagle with canned food, but the beagle would never come close enough for Johnson to grab her. Johnson tried to bring her own dog to socialize with the beagle and show that she could be trusted, but again the beagle kept just enough distance to avoid being caught.

That’s when Johnson decided a live trap was needed to try and capture the elusive stray. It would take a little more effort as it would require someone to check the trap every two hours. If the trap did work and the beagle did end up caged it would be dangerous to leave her in the cold for too long. Johnson volunteered much of her own time to be the one to check the trap every two hours. Officers and Humane Society volunteers also assisted with checking the trap.

Several of the checks showed the beagle had walked into the trap to eat but had managed to avoid triggering the door. So adjustments were made and finally on Saturday morning a check of the trap found the beagle safely inside. 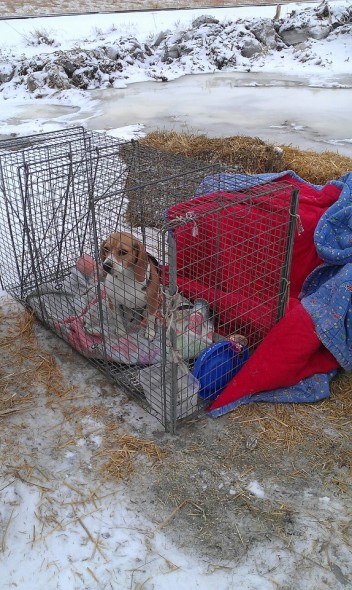 Although the beagle had been skittish of people for days she quickly warmed up to her rescuers. “Once we got her loaded in the pickup, her tail began to way, and she knew that we were friend with her,” said Johnson.

No one knows how the Beagle ended up a stray, “We really will never probably know how, or why,” said Johnson.  The important thing is thanks to Johnson and others the beagle is now safe. “She needed somebody, and what better thing did I have to do than go traipsing around in a blizzard?” said Johnson.

After a veterinary checkup the beagle seems to have weathered the cold well.  She will be available for adoption through Prairie Paws Rescue soon.