R.J. Seidel arrived at his Chicago home one afternoon expecting an important package to be waiting for him.  He had ordered a wheelchair for his dog Nirah, who has hip dysplasia.  He was “heartbroken, completely down and hating people” when he found the box had been stolen just 20 minutes after it had been delivered.

Because of nerve damage, the 11-year-old Rottweiler mix can no longer feel her hind legs.  Seidel, who suffers with lower back pain, carries his 70-pound girl down the stairs each time she needs to relieve herself.  He holds her hindquarters up with a donated sling so she can enjoy the fresh air without having to drag her legs. 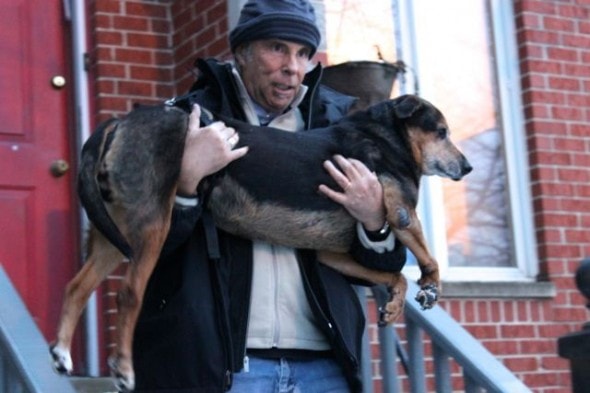 He decided to purchase a wheelchair for his beloved dog, who is still in good spirits despite her disability.  K9 Carts designs two-wheel carts for animals with disc issues and rear limb weakness.

“She has such limited freedom in her legs. I was thinking this would be such a relief for her and for me,” he explained.

Seidel was closely tracking the UPS package on January 31st, and returned home 20 minutes after it was delivered.  But much to his dismay, it wasn’t there.  He searched the neighborhood, checking alleys and dumpsters.  He scanned Craigslist and eBay for new listings of a doggie wheelchair.  He tacked up fliers offering a reward for its return. 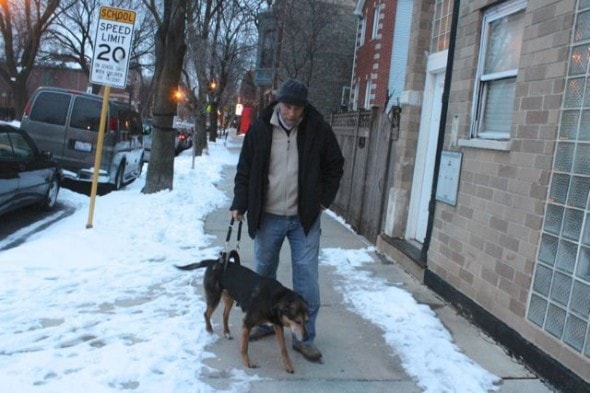 Toast Restaurant waiter Brendon shared a photo of one of the fliers on Instagram.  Jeanne Roeser, owner of Toast, contacted Seidel for a photo of Nirah so she could start a collection jar at the restaurant.  He didn’t want to seem like a charity case, and was hesitant to accept the offer.  But he realized he must put his pride aside, as it was more important to get his dog a piece of necessary equipment.

Seidel said it was “an opportunity to get [Nirah] the wheelchair and let her walk and roam freely without assistance.” 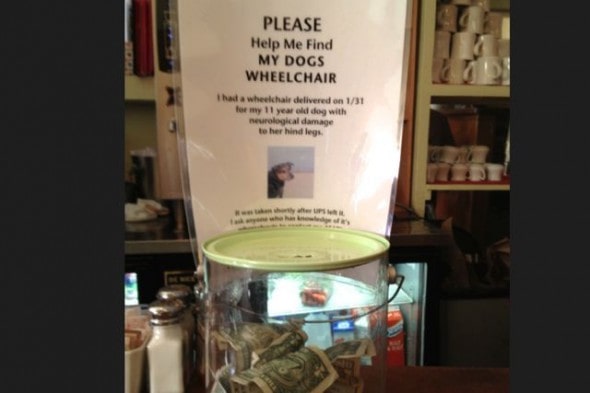 Roeser put out donation jars at her restaurants in Bucktown and Lincoln Park.  Nearly a month after the wheelchair was stolen, Seidel collected $400 from Roeser.  Soon, Nirah will have a bit of her freedom back.

“It was remarkable.  [Roeser’s] gesture was kind and generous, as well as unexpected and appreciated,” Seidel said.  “It made me realize that not everybody is an a-hole.”

Roeser does not have a dog, but she and her three children have their hands full with a cat, a chinchilla, a hamster, a hedgehog, a turtle and a frog, and she can certainly empathize with a pet’s needs.

“While it was horrible that the package was stolen, one incident doesn’t define a neighborhood,” she said.  “The good here far outweighs the bad.”