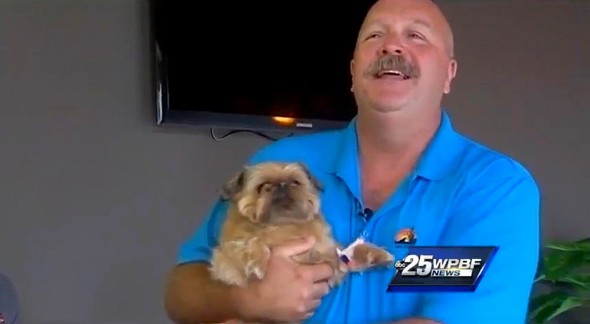 Retired New York police officer Tom Carey saved the life of a Brussels Griffon who got swept away by a wave.  The heroic man jumped into action and alternated between chest compressions and mouth-to-snout until after ten minutes, he was finally revived.

Carey was fishing at Jupiter Beach when he heard the panicked screaming of a woman.  He rushed over to Martha Brox, who explained that her dog, Oscar Wilde, was swept into the ocean.

He went under, I couldn’t find him, I’m screaming, he popped up but he was floating — he didn’t look like he was still with me,” she told WXII 12.

Carey grabbed Oscar and shook him a few times, but he was unresponsive and his eyes were glazing over.  He began mouth-to-snout resuscitation while he was crouched on the sand.

“I had him there, so I was able to work on him, I was on my knees, some waves came over my back,” Carey said.

Hope was fading for Brox, and after several minutes, she believed it was too late.  The desperation in her voice kept him going.

“I didn’t want him to die and I wasn’t going to give up,” Carey explained.

After 10 agonizingly long minutes, Oscar finally spit up some foam, and his leg twitched.  The officer and Brox grabbed him and her other dog and rushed to the nearest veterinarian.

“His tongue was hanging out, he was purple, not showing any signs of life,” said Dr. Lazlo Sinko.

The doctor administered oxygen, and within minutes Oscar regained his color and was breathing on his own. Sinko says had Carey not done the mouth-to-snout, the little dog wouldn’t have survived.

“Absolutely, it doesn’t matter what I would have done if Tom hadn’t done what he did, it would have been too late,” he observed.

Oscar was taken to Veterinary Specialty Hospital for an overnight stay in an oxygen chamber.  Carey joined Brox the next morning, and was met with a huge hug.  The two are friends now, and have decided to have dinner together with their spouses.  Oscar has appeared to make a full recovery. 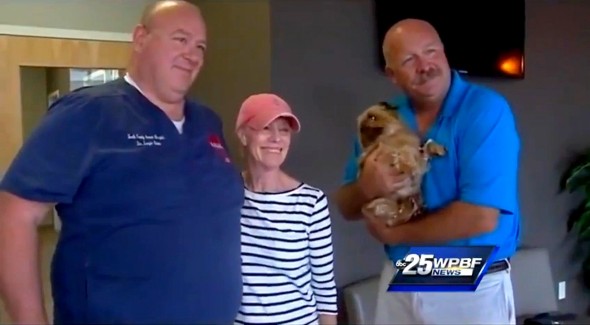