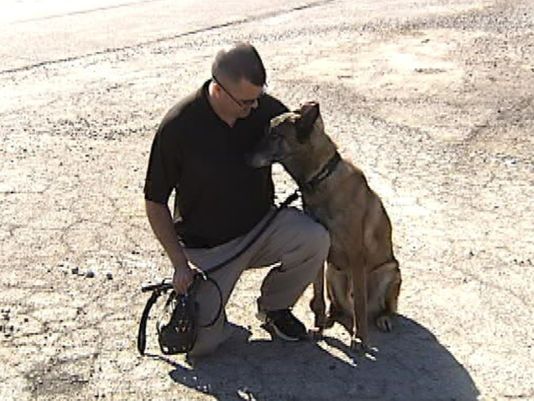 While serving in the Air Force Harvey Holt made a promise to his four-legged partner Jackson that if he made it home safe he would make sure Jackson made it back too. Now seven years later the two are finally reunited.

Air Force Sgt. Holt and Jackson served together for six months in Iraq. The two said goodbye to each other seven years ago, but Jackson was never far from Holt. Two days after Holt said goodbye to his war buddy he got a tattoo of Jackson. He had the tattoo placed on his left leg at the spot where Jackson would sit and heel.

Not only was Jackson never far from Holt’s mind, Holt had made a promise to Jackson that he hoped to one day fulfill.

“About seven years ago when I separated from him, I had made him a promise in Iraq that I would bring him back,” said Holt. “If he brought me back safe, I would have brought him back and gave him a good home for the rest of his life.”

Now Holt is getting the chance to make good on that promise. Jackson is finally retired from the military and the two were reunited this week. Jackson isn’t the same dog he was when he last saw Holt. He’s a little bigger now and his back legs have some issues. Not long after they were reunited Jackson started settling in with his former handler and Holt was happy to spoil his war buddy.

When they arrived to Holt’s hometown in Indiana Jackson was greeted with a hero’s welcome. On Thursday afternoon family, friends, police, medics and all sorts of supporters from Green County gathered to welcome Jackson to his new home.