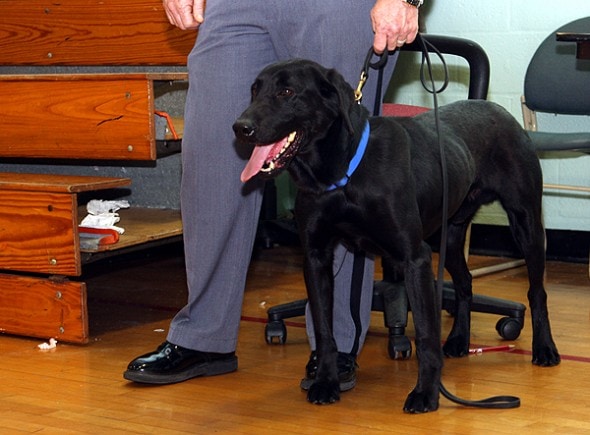 Slick is a war hero that has saved the lives of countless soldiers. He is also only 5-years-old. The black lab has retired from military service but he isn’t done helping people. On Tuesday he was introduced as the newest K9 for Prince George’s County Police Department in Maryland.

Slick served two six-month tours in Afghanistan as an explosive-detection dog for the U.S. Marine Corps. Much of Slick’s work is classified, but what information is known leaves little doubt to what an amazing hero he is. According to police he “saved uncountable military personnel” by sniffing out improvised explosive devices.

Slick had some dangerous moments while serving in Afghanistan. While conducting an explosives sweep, he was attacked by a group of feral dogs. “During another deployment, he had an IED that went off very close to his proximity, and [it] did some damage to his eye,” said Cpl. Scott Allen. “None of it was permanent. He’s okay. He sees great today, so he’s doing very well.”

Slick has now retired from the military, but he is not done being a hero. He will put his bomb-detecting skill to work with the PGPD and will also be trained to sniff out gun residue which will help police recover weapons. Some of Slick’s duties will let him show off his friendly nature, including attending sporting events, schools and possibly hanging out with world leaders. “He’s a very social dog, so it’s nice in terms of searches where we’ll use him at FedEx field or any kind of detail for the president,” Allen said. “He gets along with just about everybody.”