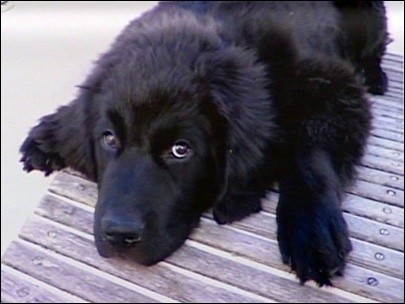 Justice has finally been served to the family of Rosie, who was needlessly shot and killed by Des Moines police in 2010.  Though it will not bring back their beloved dog, a judge has awarded $51,000 plus attorney’s fees to Charles and Deirdre Wright.  The Wright’s filed the civil suit against the city on the two year anniversary of Rosie’s death.

It all began when Rosie, a beautiful and gentle Newfoundland dog escaped from her yard in November 2010.  Someone saw her roaming the neighbourhood and called police who responded and tazered Rosie several times, claiming that she was aggressive.  When they failed to subdue the terrified animal with the tazer, they shot her repeatedly, while frightened neighbours with a small child looked on.

Police stuck to their claim that Rosie was aggressive however a dash cam and eye witness reports prove that to be false.  According to witnesses, the officers were only concerned that they might be blamed for what might happen should the dog run away.  Rosie was, at this point in her own yard and was making no move to leave.  Their neighbours said that they were not even given adequate time to go into their house before the police started firing and so they and their young child saw the brutal murder of the Wright’s family pet.

The lawyer for the Wright’s is Adam Carp who has taken similar cases before. “I’m definitely an animal lover on many levels,” he said. “I’ve been vegan for about 13 years and my wife for over 21 years. We live our lives in accordance with providing compassion for all animals, not just dogs and cats. We care for four cats, from age 3 to 26. We love them, of course.”

Rosie was a gentle giant, loved and missed by her family.  Hopefully this case will draw attention to, and result in more and better training for police in dealing with loose animals to prevent tragedies like this from happening again.